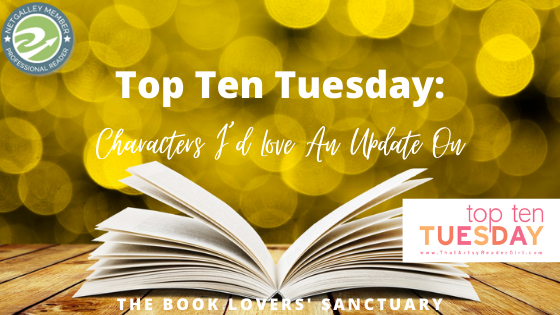 Happy Top Ten Tuesday to everyone! This has been a rather skewed week for me as, on Monday, after heaing out for my usual 5k run, I did my usual bi-weekly lateral flow test… and a moment later spotted two clear pink lines. A second lateral flow and a PCR later and I am now one of 44,434 confirmed cases in the UK yesterday.

It’s not that I feel unwell… maybe a mild headache, maybe a mild tightness in the chest… but is that a genuine physical symptom or just psychosomatic now that I have been confirmed positive? So hard to tell!

Anyway, it did put a spanner in my usual routine so I am a little late writing this, what with sorting out work and cover and a trip to hospital to be fitted with a monitor because I am part of a covid trial, too! And this is a lovely theme: characters I would love an update on. The where are they now? sort of questions.

This is obviously a chance to revisit old friends from my reading, but as I was compiling the list I found it was less telling about the characters than I expected. Many characters I loved, were not included here, because there stories were so neatly wrapped up already. What more was to be said? The following list, therefore, comprise novels where – whilst wonderfully composed and crafted – left something open in their endings…

Happy and in love and enjoying lots of guilt-free pleasure, and I hope his mum is still going strong too!

This novel was a delight and a joy – amidst the horrors and the trauma, of which there is plenty. Cyril, adopted but never accepted as a “real Avery”, gay in homophobic Ireland, illegitimate son to an unmarried woman, in love with his best friend, unhappily – very briefly – married, unsuspecting father… Cyril’s quiet heroism and Boyne’s humour was just so touching!

Mycha Mortimer from Redhead by the Side of the Road

We left Mycah as he – just about – rescued his love life and reconnected with the saintly Cass – whom he refused to call his girlfriend because of their ages.

I would hope that Cass, supported by Mycah’s sisters I am sure, would have blunted some of the edges of his ritualistic and fastidious behaviour; but also accepted him for it.

Where I hope she is

Jean Swinney had such a quiet dignity to her as she cared for her mother, managed her somewhat joyless job in a male world, met and fell in love with a married man… and did not act “shabbily”.

The ending of the novel left her on the cusp of a happy ending, and wrenched it away from her in an incredibly abrupt and traumatic way.

I’d hope she would rise to this additional devastating challenge with the same dignity and strength – but also move on from it to find true happiness, whether in a relationship or not.

Where do you go once you have been kidnapped by a Green Man figure in Dead Papa Toothwort? How does that experience affect your life? I would hope that Lanny stayed in the village, stayed friends with Pete the artist – never became ostracised from that community, but also never lost the wonder and awe of the woods around it either. Perhaps, adult Lanny still leaves offerings to Dead Papa Toothwort…

Where I hope they are

With these two, I am not entirely convinced that their relationship is wholly healthy, for either of them. The failure to communicate between them! Even by the end of the novel: did these kids not learn anything?

And the novel ends with Connell being offered a place in New York MFA Creative Writing course… does he take it? I hope so.

Oh boy, Hugh (Shuggie) Bain had a hell of a childhood: born into poverty, born to an alcoholic mother and unreliable absent father; growing up to be abandoned by his sister and brother, growing up to be a carer for his mum.

We leave him as a young man, living alone, in a boarding house, trading sex for favours with men, but finding friendship and somehow a ray of optimism.

Damn! I hope he found some security and safety!

The relationship between these two was so sweet – so unexpected – so powerful that it did sort of open my eyes to Romance as a genre.

And, whilst the novel ends with them being together – and obviously it would be churlish in the extreme to wish them anything else! – their relationship as First Son of America and Prince of Wales is challenging: how would they manage international conflicts, manage Alex’s inevitable democratic change in status, fatherhood…

This is an emotional rollercoaster of a book – that spirals into the most poignant grief and the most powerful strength and Conor O’Malley – for whom the Monster comes walking as his mother dies of cancer – is such a powerfully emotive character!

As he enters adulthood, I’d love to see how his relationship with his grandmother developed, and how his experience with the monster shaped him. I like to think he is a writer now!

Where I hope she is

We last see Trista – the fae changeling puppet who was intended tp masquerade as the real Triss, before she found her own identity – on the back of a motorbike with the irrepressible Violet roaring into who-knows-what adventure.

I would love to see where these two end up, and what they get up to!

I hope they see the world!

Where I hope they are

Having a riot somewhere – anywhere – and raising Hell! Or possibly Heaven. Ineffably!

And, boy, I hope they acknowledge their feelings for each other!

Also, there was – I am lead to believe – a plan for a sequel which is in the process of being adapted for TV… Woot!

So that is my list of characters whom I would love an update on – novels with open and inviting endings that don’t, quite end.

One thing I do hope to do whilst self isolating – ten more days to go! I am bored already – is try to catch up on some of the reviews I have let slip… I need some sort of structure and routine and outcome from these days!