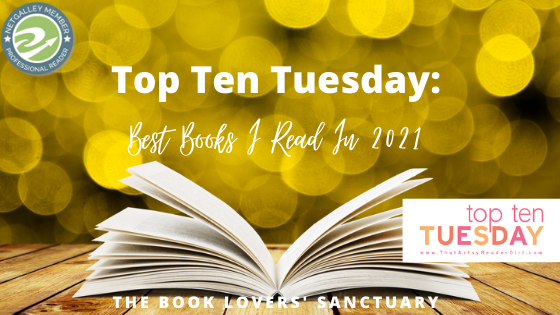 It’s that glorious time of year! A belly full of pudding. A table laden with far too much cake (both traditional fruit and chocolate yule log), and too many gingerbread men, chocolate cookies and mince pies. A television schedule filled with Christmas Specials. And a chance to look back on the year that is drawing to its end with a TTT focussed on the best books read this year.

This is How You Lose The Time War, Amal El-Mohtar and Max Gladstone

A story of a war, of a love, of language. This was a stunning and gorgeous novel, with two vibrant scintillating central characters embodying themes of conflict and love in the most exquisite ways.

I cannot say that reading Shuggie Bain was a delight: the emotions it evokes in its tale of poverty, abandonment and alcoholism are painful, raw and visceral. Bleak barely scratches the surface. But it is a bleakness with does not descend into sentimentality, does not lose hope or love, is not without its quiet hopeless heroism…

The sequel to The Silence of the Girls was a wonderful depiction of life for the voiceless captured Trojan slave women, still encamped in the Greek war camps beneath the walls of fallen Troy.

There are so many Greek myth retellings at the moment, but Barker’s works are top notch!

Klara and the Sun, Kazuo Ishiguro

Big questions and themes: what is it to be alive? to be conscious? But this was a novel that did not lose the characterisation or the voice of Klara in its dealing with those big issues.

Ishiguro made some fantastic world building – so quietly dystopian – in the background of this novel too.

This is tender, sweet and ever-so touching.

A single voice narrating the events on a vast impossible House, filled with tides and birds and clouds, with halls that stretch on apparently infinitely…

This was a puzzle unfolding, a delicately structured and layered narrative that hinted at its symbolism and metaphor without ever labelling or reducing itself to symbol.

An outstanding novel, once you accept the impossibility of it all.

The brutal murder of a priest in an aristocratic house in Ireland…. class, religion and gender conflicts flow through the pages with a deftness and assurance here that it gorgeous to read.

At one level, this is a mystery and an historical police procedural; but there are so many other deeper characters and thematic ideas gently ruminating through the pages as well. Wonderful.

This novel was all about the quiet dignity of those who are simply trying not to treat each other shabbily in incredibly difficult post-war, pre-equality times.

Oh, and there is an alleged virgin birth to investigate too.

What happens if our life only truly begins after we have died? And what happens if, in that afterlife, we find love in the arms of our ferryman, we find a found-family in a tea room, we find our selves?

In the ocean, there is a structure that allows you to slip through time; but as the past is changed, the future twists and you lose your memories becoming someone… else. But can love endure even if the memory of it is lost?

It is difficult with Pulley to wonder how a new novel can reach the heights of all that has gone before, but each time she manages it! This was a book with a full heart!

This novel is what it says in the title: a deeply chilling and powerful Gothic novel – steeped in a sense of violation – and set in Mexico!

Geriatric cosy detectives with an edge as Osman brings Elizabeth and Joyce, Ibrahim and Ron back for a second investigation – and this one felt more confident than the first book in the series.

We abound in rogueish spies and gentlemanly mob bosses, stolen diamonds and clues – it is preposterous but absolute fun, with its fair share of pathos too.

And this is the book that I am ending the year with: another septuagenarian whodunnit introducing the wonderfully sweet Felix Pink – widower and bereaved father, living alone with his dog and quiet routines, and a sideline as an exiteer, witnessing and easing the deaths of the terminally ill whilst treading the fine line between witness and assisting suicide.

But, when the wrong man ends up dead, Felix finds himself both on the run from the police and investigating the crime himself.

A smart thriller – although perhaps not quite as clever as Hallett thinks – presented through a selection of transcripts of emails and messages between various members of the Fairway Players who are simultaneously putting on a performance of All My Sons and raising money to pay for Poppy Reswick’s cancer treatment. In the course of all this, a newcomer to the Players and the community is found dead and we are invited to uncover her murderer…

And two of my best reads this year were actually re-reads so I am throwing these out as well. Re-reading is not something I often do – and these two were parallels: one I read in print form, having listened to it as an audiobook previously; the other, I listened to as an audiobook production, having read it in print before!

Utterly familiar and iconic, but no less powerful and engaging for that!

Stoker’s Dracula stands the test of time so well, and the Audible adaptation giving voices to each character so you could hear them was fabulous. Seward’s regard for the oh so manly and dashing Quincey Morris went a little beyond simple bromance, if you ask me!

Thomas Cromwell may be one of the most obscure Tudor historical figures, but Mantel’s interpretation of him is so vibrant and potent and, well, alive!

Personally, I don’t think this is the strongest in the trilogy (there are structural issues with it in my humble opinion, particularly in choosing where to end it… Bring Up The Bodies was structurally much more satisfying) but the power of the novel lies in its characters and world building and Mantel’s masterful language.

Oh, that opening scene with the boot…

So, I am really looking forward to reading your top ten lists of the year… and no doubt adding an unreasonably high number of them to my wishlist…

And it is quite scary to think that our next Top Ten Tuesday will occur in 2022!

Enjoy the New Year in whatever way you choose to celebrate: for me, it will be by tucking my daughter up in bed, having a glass of wine and curling up on the sofa with my other and better half – and, of course, with a book.