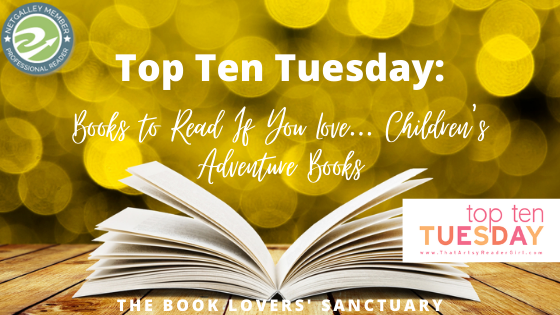 The last few days have been busy busy busy… not so much with work this time – in fact, having been poorly I have had time off work! – but with my stepson’s wedding. Complete with family tensions, emotional breakdowns and oh! so many trips shopping to find outfits… But for all the tension, it is hard not to love a wedding, isn’t it.

And my daughter, who is only eight and has a severe global speech and language delay, who is painfully shy, especially among strangers, managed her role as flower girl, managed the reception and speeches sitting at a table with strangers… and in the evening event, taking me totally by surprise, spent the evening on the dance floor, spinning and twirling and dancing with the other children there, with me, on her own. And loving every moment of it! It made all the shopping trips and tears and frustrations worth every moment.

Anyways, onto this week’s list which is a real recommendation list and a chance to explore some of our favourite genres, authors and reads.

What I might do, with memory of my daughter’s joy on her face, is consider her preferred reading, as she is now of an age where her interests and mine are overlapping! I look at her little growing library and ache that these books were not around when I was her age! I mean, look at the books in her most recent book haul (where I missed a trick by not keeping a couple back for Christmas)

So, books to read if you love… children’s adventure stories:

A Pinch of Magic, Michelle Harrison

The Widdershins sisters, Betty, Fliss and Charlie are trapped, prevented from leaving their home on Crowstone by an ancient family curse.  When they inherit three magical objects with the power to change their fate, adventure beckons.  But are they being led into even greater danger?

We have only just begun on this one, but of the list above, this was the book that she picked up first. Chapter One was a little slow – possibly impeded by the distraction caused by the wedding – but when she found that there was a map at the front and she could track Betty Widdershin’s journey, she was hooked! And tonight, Chapter Two introduced us to Granny’s magical carpet bag – that gripped her imagination!

Deciding she has nothing more to lose, Sophie makes her way to the moving castle that hovers on the hills above her town, Market Chipping. But the castle belongs to the dreaded Wizard Howl, whose appetite, they say, is satisfied only by the souls of young girls…

I have wanted to read this for a while now – for so long, it has been on my radar as a novel I thought I should have read, and a novel which has received so much love that I felt I wanted to read it… but never got around to it. And also, a chance to introduce daughter to Studio Ghibli!

Mum’s away. Dad’s in charge. There’s no milk. So Dad saves the day by going to buy some.

There are absolutely none of the following inside: GLOBBY GREEN ALIENS! INTERGALACTIC POLICE! PIRATES! And most definitely NOT a time-travelling hot-air balloon piloted by the brilliant Professor Steg …

Adventures need not take themselves too seriously – and oh golly does my daughter love this one! Anarchically silly, very much tongue-in-cheek, very, well, Neil Gaiman! And her face when she realised that the book I was reading one day was also a Gaiman!

Monster Hunting isn’t as easy as it looks. And Jack should know. Because an ogre has just appeared in his garden and tried to EAT HIS AUNT. (She was the winner of the World’s Worst Aunt competition, but that’s Not The Point).

After (sort of accidentally) defeating the ogre, Jack finds himself apprenticed to a grumpy, 200-year-old monster hunter called Stoop and heading off to Cornwall, where more ogres are causing havoc.

We’ve not begun this one yet, but it sounds like great, good natured fun!

Podkin is the son of a warrior chieftain. He knows that one day it will be up to him to lead his warren and guard it in times of danger. But for now, he’s quite happy to laze around annoying his older sister Paz, and playing with his baby brother Pook. Then Podkin’s home is brutally attacked, and the young rabbits are forced to flee. The terrifying Gorm are on the rampage, and no one and nowhere is safe. With danger all around them, Podkin must protect his family, uncover his destiny, and attempt to defeat the most horrifying enemy rabbitkind has ever known.

Oh my, she loved this book! Warrior rabbits. Magic. Actually, a genuinely scary antagonist in the Gorm – rabbit infected by iron infused with the spirit of an evil God. Sort or a cunicular Darth Vader. We did need to take a break occasionally when the Gorm approached and she was tired – but a reminder that they were rabbit sized and only yay-big turned them back into a manageably cute side of scary!

And not enough to deter her from books two or three of the series.

And I was really impressed by her ability to manage the dual narrative and the pretty wide cast of characters. Again, another book where she loved tracing the characters’ journeys and quests on the map at the front.

A year after the death of her older brother, Prue Haywood’s family is still shattered by grief. But everything changes when a stranger arrives at the farm.

A new, incredible technology has been discovered in the city of Medlock, where a secretive guild of inventors have developed a way to capture spirits of the dead in animal-like machines, bringing them back to life.

This was a slower novel than some of the others and featured a little more science, a little more world building, and little more interiority (and deals with grief) than some of the other books here – possibly reflecting a more mature audience intended audience? Even so, the idea of the animal machines, imbued with ghost souls gripped her imagination – and for me a female protagonist and a female led cast in a STEM environment cannot be a bad thing!

How to Train Your Dragon, Cressida Cowell

Hiccup Horrendous Haddock the Third is a smallish Viking with a longish name. Hiccup’s father is chief of the Hairy Hooligan tribe which means Hiccup is the Hope and the Heir to the Hairy Hooligan throne – but most of the time Hiccup feels like a very ordinary boy, finding it hard to be a Hero.

Another book that has become a re-reader for her – and I was surprised that she was able to manage the huge differences between the book and the films. Let’s be honest, apart from the character names, there are very few points of connection between book and film!

So far, she has stayed with just the first book.

Amari and the Night Brothers, B. B. Alston

Her big brother Quinton has gone missing.
No one will talk about it.
His mysterious job holds the secret…

So when Amari gets an invitation to the Bureau of Supernatural Affairs, she’s certain this is her chance to find Quinton. But first she has to get her head around the new world of the Bureau, where mermaids, aliens and magicians are real, and her roommate is a weredragon.

We have not begun this one yet, but this a novel that I am looking forward to… and my daughter is of an age where mermaids remain a big draw!

Oliver and the Seawigs, Phillip Reeve

Along with his new friends, a grumpy old albatross, a short-sighted mermaid, and a friendly island called Cliff, Oliver goes off in search of his missing parents. But before he can put his rescue plan into action there’s the evil Stacey de Lacey and an army of greasy, green sea monkeys to contend with . . .

I adore Phillip Reeve – and having met him at a conference, where he entered in his tweeds as if he had just left a Gothic ancestral home in the moors to the echoes of the howls of a spectral hound, I have to say he is a gent and a wonderfully readerly writer – and hope that this will mark the start of our journey into Reeve’s novels. Mortal Engines might be a couple of years ahead of us!

The Jolley-Rogers and the Ghostly Galleon, Jonny Duddle

Every full moon, a mysterious ship is seen off the coast of Dull-on-Sea. Then, the day after, gold and jewellery are missing from the homes, shops and museums of the town. Matilda needs the Jolley-Rogers’ help to investigate. Can Matilda and Jim Lad retrieve the stolen booty from the mysterious ship before the moon fades? Or will they end up stuck on board with ghostly pirates until the next full moon?

We love the Jolley-Rogers series and this is perhaps our favourite – I loved the spectral pirates, the comedic panic in the town, the adventure. And Matilda, a feisty female protagonist, was great!

Amelia Fang is the biggest hearted vampiress you’ll ever meet. In this adventure, she and her friends Florence the yeti (DON’T CALL HER BEAST), Grimaldi the Death and Prince Tangine (reformed spoiled sprout), along with her pet pumpkin Squashy, must brave the journey to the terrifying Kingdom of the Light to try to find Tangine’s missing mother, Queen Fairyweather.

We loved Amelia Fang – the ick element is high in both the narration and the illustrations: eyes roll regularly and I am not sure I’d want a cookbook inspired by its dishes! And of course, unicorns for a young lady who has devoured all things My Little Pony were always going to be a draw!

Julia has followed her mum and dad to live on a remote island for the summer – her dad, for work; her mother, on a determined mission to find the elusive Greenland shark. But when her mother’s obsession threatens to submerge them all, Julia finds herself on an adventure with dark depths and a lighthouse full of hope…

I doff my proverbial cap to Kiran Millwood Hargrave: I have yet to read anything by her that I have not loved from Young Adult – The Girl of Ink and Stars and The Deathless Girls – to Adult – The Mercies – and combined with te absolutely stunning art work and illustration by Tom de Freston, this is, surely, a classic in the making.

So, there we have it: once again I have gone beyond the remits offered to me on a top ten Tuesday! And I have taken the chance to bask in the joy that I have in my daughter and our reading time together… even if her bedtime routine is stretching later and later because we are reading longer and longer together. And I love that she is starting to read these home-books with me – often alternating words – as well as her (slightly less inspiring but maybe more phonically appropriate) school books.