The Pure In Heart, Susan Hill 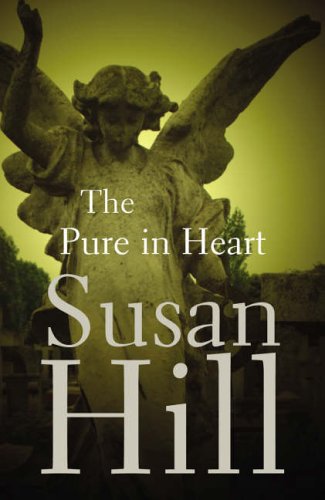 I’m genuinely unsure of what to make of this book.

Don’t get me wrong. It’s not a bad book; listening to it as an audiobook was a pretty pleasant way to spend my journeys to work.

But it didn’t seem to be what it was packaged as and marketed as: a crime mystery. It felt more like a soap opera in which the main character is a policeman – Detective Chief Inspector Simon Serrailler. And terribly middle class.

Not that there’s anything wrong with that.

But Serrailler lives in a pristine flat overlooking the Cathedral, and takes extended breaks to Venice; Cat and Chris Deerbon – his GP sister and brother-in-law – live in their rustic farmhouse; Serrailler’s parents’ garden is landscaped. Tea seems always accompanied by biscuits or cake. They all have larders!

My granny had a larder. But I don’t know anyone else who has ever had one. I’d quite like a larder but do these things even exist anymore?

These people are not the so-called squeezed middle: they are comfortable and content and just a little… smug. A little Midsomer. And that did alienate me a little.

As did the portrayal of Andy Gunton. He’s released from prison in the opening chapters, into the care and home of his sister, Michelle. That home was such a two-dimensional, stereotypical and grotesque – blaring televisions, food dripping in fat, fry-ups and fags. An army of harridan mothers harassing a suspected paedophile. It was all just a little Jeremy Kyle.

To be fair, Gunton was actually a decent character who had made a mistake when he was kid and is trying to go straight on his release. I did feel for him. But it never got to the point where the novel felt like an analysis or exploration or critique of the lack of support given by the probation service. He did fall back into crime but it just sort of… happened. And it didn’t connect to the main plot in any more than a tangential way. It happened at the same time in the same place. Literally, a co-incidence.

But then, was there really a main plot? Was it the abduction of David Angus? Was it the destruction of the Angus family as a result of the abduction? Was it the death of Martha Serrailler, Simon and Cat’s disabled sister? Any of those could be the main plot; all get fairly equal time spent on them. Along with Gunton.

And then a variety of secondary characters drifted in: Karin who appears to have beaten the cancer which riddled her in the first book through the power of organic berries and willpower alone; Diana, Simon’s friend-with-benefits who, after a year’s absence, starts harassing him in an utterly unrealistic way for a fifty-something year-old business woman; or even Cat, whose pregnancy and new son turn her into a domestic goddess.

And then there’s Simon Serrailler himself. In the first book, Various Haunts of Men, Freya Graffham was our primary point of view character and we only really saw Serrailler through her eyes. In this novel, for obvious reasons, Hill brought Serrailler to the forefront … and the mysterious and enigmatic DCI speaks to us directly. And is, at times, quite unpleasant. Particularly towards women: the only genuine relationship he seems capable of are with his sisters.

As I say, it was a decent book. A pleasant comfortable read. Pleasant in the same way that The Archers is pleasant and comfortable. I’m guessing that this novel is introducing a series of threads which will be picked up in future novels – I’m half-a-dozen books behind where Hill’s got to in writing the series. Just take it for what it is; don’t expect social realism.