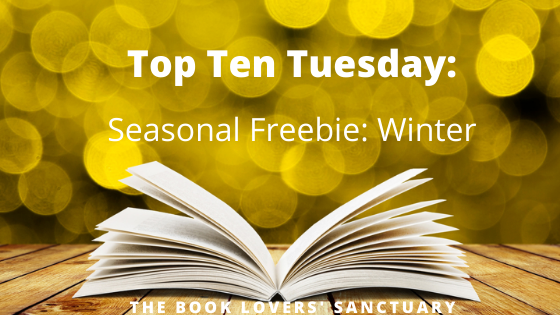 A wide choice! Almost too wide. I am not sure whether there is going to be an overall directions here but I am going to take this as a chance to rave about some wonderfully wintery books, with perhaps a nod towards Shakespeare’s A Winter’s Tale where the somewhat precocious Mamillius tells us

A sad tale’s best for winter: I have one of sprites and goblins.

The Bear and the Nightingale, Katherine Arden

Before the end, you will pluck snowdrops at midwinter, die by your own choosing, and weep for a nightingale.

All three novels in the Winternight Trilogy are wonderful and feature a fully embodied personification of Frost, the God of Midwinter, who

In Russian, … was called Morozko, the demon of winter. But long ago, the people called him Karachun, the death-god. Under that name, he was king of black midwinter who came for bad children and froze them in the night.

And there is a wonderfully terrifying tragic vampire moment in it too!

The Wintersmith was……nothing. But the snow outlined him. It flowed around him in lines, as if traveling on an invisible skin. He was just a shape, and nothing more, except perhaps for two tiny pale purple-gray dots in the air, where you might expect to find eyes.

What harm can a little dance do? Slip into the dance between the Summer Lady and the Wintersmith as young TIffany Aching does and find out!

Humans need fantasy to be human. To be the place where the falling angel meets the rising ape.

Yes, another Pratchett – and a repeat from last week – but it is such a great book! Death taking on the mantle of the Hogfather, the Discworld’s equivalent of Santa.

You can’t expect to live in the world like the world’s your private myth.

Ali Smith’s Seasonal Quartet is a gorgeous collection of novels, and Winter was a powerful entry – riffing off Dickens’ A Christmas Carol and art, philosophy, climate change.

I mean just look at the opening:

It was an age ago I read this and I recall lots of snow, mountains and a man mourning his dead brother. A slip on the road and a wrong turning led to him sliding through time and entering a village mourning its own losses.

I’ve not read much by Mosse, having tried and given up on Labyrinth and found her writing style a little overwrought, but I enjoyed this one!

“D’you ever feel,” he says, “the back of your neck prick—all the hairs lifting there—as if a cold wind had come into the room and hunted you out, and only you? It’s nothing, you say to yourself—what’s the English phrase—the goose walks over your grave?—but if you knew!”

Melmoth was a creepy tale, set in a snow and ice bound Prague where a mysterious hooded figure of Melmoth the Wanderer haunted people who were riddled with guilt. The tales were told in letters and memories and our protagonist Helen bore her own fair share of guilt too.

This was a novel that has stayed with me far more than her previous Essex Serpent did.

If a life can be ruined in a single moment, a moment of betrayal, or violence, or ill luck, then why can a life not also be saved, be worth living, be made, by just a few pure moments of perfection?

A series of interconnected tales, woven down through time from the near-future to the recent past, to world wars and vikings and myth. This was a wonderful young adult novel – and the vampires in here rival those in The Bear and the Nightingale.

What you go searching for and what you find aren’t always the same.

This was a book that stayed with me a long time!

A family’s grief and trauma at the loss of their child – a child who seems to have been particularly troubled and perhaps haunted in the flashbacks – drives them apart and into the arms of dangerous folklore and mediums.

Alongside Midwinterblood, one of the best uses of a hare in literature in one of the creepiest possible ways – and yet it is set in winter. The opening line runs

Overnight, snow had fallen thickly again in Croftendale and now in the morning the fells on the other side of the valley were pure white against the sky.

Oh man I so need to read this one! It has been hanging about on my TBR pile for ever and I have no idea why I have not read it yet! It contains everything I love in a book: mythology, fairytale, it seems wonderful!

Alaska, 1920: a brutal place to homestead, and especially tough for recent arrivals Jack and Mabel. Childless, they are drifting apart–he breaking under the weight of the work of the farm; she crumbling from loneliness and despair. In a moment of levity during the season’s first snowfall, they build a child out of snow. The next morning the snow child is gone–but they glimpse a young, blonde-haired girl running through the trees. This little girl, who calls herself Faina, seems to be a child of the woods. She hunts with a red fox at her side, skims lightly across the snow, and somehow survives alone in the Alaskan wilderness. As Jack and Mabel struggle to understand this child who could have stepped from the pages of a fairy tale, they come to love her as their own daughter.

Marley was dead: to begin with. There is no doubt whatever, about that… Mind! I don’t mean to say that I know, of my own knowledge, what there is particularly dead about a door-nail. I might have been inclined, myself, to regard a coffin-nail as the deadest piece of Ironmongery in the trade. But the wisdom of our ancestors is in the simile; and my unhallowed hands shall not disturb it, or the country’s done for. You will therefore permit me to repeat, emphatically, that Marley was as dead as a door-nail.

I mean, can there be a more iconic Christmas novel? Scrooge, Cratchits, Tiny Tim, Ghosts of Christmas Past, Present and Future…

God bless us every one!

I hope you’ve enjoyed reading about my favourite wintery reads with a touch of the goblin and elf to them and I look forward to your comments and reading your lists too! I hope you all have an wonderful winter with many books to read huddled around an open fire with copious warm drinks and loved ones!

January 5: Most Anticipated Releases for the First Half of 2021
January 12: Resolutions/Hopes for 2021 (bookish or not!)
January 19: Books I Meant to Read In 2020 but Didn’t Get To (You could take this opportunity to tell us what’s left on your seasonal TBRs from last year. Or books you were super excited about and then you didn’t get to them.)
January 26: New-to-Me Authors I Read in 2020 (If you didn’t read 10 new authors, that’s fine! Just do what you can.)