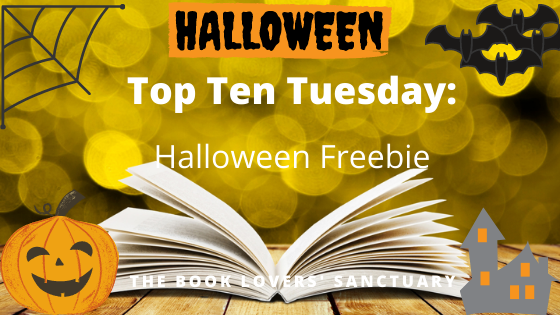 Freebies worry me. There are so many obvious Hallowe’en topics – vampires, zombies, witches – and they would all be great if a little predictable. So let’s throw some curve balls in this week – as much as anything to celebrate my finding enough time to return to the blog and TTT this week!

Oh my I love these – and am horrified that anyone would do this to a perfectly good book at teh same time!

I particularly love the Jack Skellington one! But surely I still shudder to consider the idea of taking a knife to a book!

And am I the only one trying to read the parts that are visible and work out which books they were made from?

We have had a poor experience of pumpkins this year, having had two which have quickly rotted before Halloween!

My daughter did demand a Nightmare Moon pumpkin, which did stretch my very limited carving skills! So I am not going to attempt anything as gorgeous and artistic as these below!

And, with Trick-or-Treating and Bonfire Night (bonfires are so much more engaging and alluring than the showy fireworks of November 5th!) effectively cancelled this year, let’s have a quick recap of some genuinely creepy supernatural novels.

White Is For Witching, Helen Oyeyemi

In a vast, mysterious house on the cliffs near Dover, the Silver family is reeling from the hole punched into its heart. Lily is gone and her twins, Miranda and Eliot, and her husband, the gentle Luc, mourn her absence with unspoken intensity. All is not well with the house, either, which creaks and grumbles and malignly confuses visitors in its mazy rooms, forcing winter apples in the garden when the branches should be bare. Generations of women inhabit its walls. And Miranda, with her new appetite for chalk and her keen sense for spirits, is more attuned to them than she is to her brother and father. She is leaving them slowly –

Slipping away from them –

The worst thing possible has happened. Richard and Juliette Willoughby’s son, Ewan, has died suddenly at the age of five. Starve Acre, their house by the moors, was to be full of life, but is now a haunted place.

Juliette, convinced Ewan still lives there in some form, seeks the help of the Beacons, a seemingly benevolent group of occultists. Richard, to try and keep the boy out of his mind, has turned his attention to the field opposite the house, where he patiently digs the barren dirt in search of a legendary oak tree.

For centuries, the mysterious dark-robed figure has roamed the globe, searching for those whose complicity and cowardice have fed into the rapids of history’s darkest waters-and now, in Sarah Perry’s breathtaking follow-up to The Essex Serpent, it is heading in our direction.

It has been years since Helen Franklin left England. In Prague, working as a translator, she has found a home of sorts—or, at least, refuge. That changes when her friend Karel discovers a mysterious letter in the library, a strange confession and a curious warning that speaks of Melmoth the Witness, a dark legend found in obscure fairy tales and antique village lore. As such superstition has it, Melmoth travels through the ages, dooming those she persuades to join her to a damnation of timeless, itinerant solitude. To Helen it all seems the stuff of unenlightened fantasy.

1906: A large manor house, Wake’s End, sits on the edge of a bleak Fen, just outside the town of Wakenhyrst. It is the home of Edmund Stearn and his family – a historian, scholar and land-owner, he’s an upstanding member of the local community. But all is not well at Wake’s End. Edmund dominates his family tyrannically, in particular daughter Maud. When Maud’s mother dies in childbirth and she’s left alone with her strict, disciplinarian father, Maud’s isolation drives her to her father’s study, where she happens upon his diary.

The stench of the Fen permeates the house, even with the windows closed. And when Edmund lies awake at night, he hears a scratching sound – like claws on the wooden floor…

It is the story of four seekers who arrive at a notoriously unfriendly pile called Hill House: Dr. Montague, an occult scholar looking for solid evidence of a “haunting”; Theodora, the lighthearted assistant; Eleanor, a friendless, fragile young woman well acquainted with poltergeists; and Luke, the future heir of Hill House. At first, their stay seems destined to be merely a spooky encounter with inexplicable phenomena. But Hill House is gathering its powers—and soon it will choose one of them to make its own.

Fledgling, Octavia Butler’s new novel after a seven year break, is the story of an apparently young, amnesiac girl whose alarmingly inhuman needs and abilities lead her to a startling conclusion: She is in fact a genetically modified, 53-year-old vampire. Forced to discover what she can about her stolen former life, she must at the same time learn who wanted – and still wants – to destroy her and those she cares for and how she can save herself. Fledgling is a captivating novel that tests the limits of “otherness” and questions what it means to be truly human

Her Body and Other Parties, Carmen Maria Machado

In Her Body and Other Parties, Carmen Maria Machado blithely demolishes the arbitrary borders between psychological realism and science fiction, comedy and horror, fantasy and fabulism. While her work has earned her comparisons to Karen Russell and Kelly Link, she has a voice that is all her own. In this electric and provocative debut, Machado bends genre to shape startling narratives that map the realities of women’s lives and the violence visited upon their bodies.

A wife refuses her husband’s entreaties to remove the green ribbon from around her neck. A woman recounts her sexual encounters as a plague slowly consumes humanity. A salesclerk in a mall makes a horrifying discovery within the seams of the store’s prom dresses. One woman’s surgery-induced weight loss results in an unwanted houseguest. And in the bravura novella Especially Heinous, Machado reimagines every episode of Law & Order: Special Victims Unit, a show we naively assumed had shown it all, generating a phantasmagoric police procedural full of doppelgangers, ghosts, and girls with bells for eyes.

Once again, these are significantly outside my creative or cooking skills, but if we are settling down beside the fire with decorations and books, we need some nibbles too.

November 3: Non-Bookish Hobbies (Let’s get to know each other! What do you do that does not involve books or reading?)
November 10: Book Titles that Would Make Great Song Titles (submitted by Deanna @ A Novel Glimpse)
November 17: Characters I’d Name a Pet After (These could be your own pets (present or future), you could pick 10 different animals and tell us the name and animal type, or you could choose 10 names that would make fun cat names, etc. Put your own spin on this one!) (submitted by Nushu @ Not A Prima Donna Girl)
November 24: Thanksgiving/I’m Thankful for… Freebie
December 1: Books I Want to Read Again (This could mean books you plan on re-reading OR books you wish you could read again for the first time.)
December 8: Holiday/Seasonal Freebie (holiday books/covers/titles, wintry reads, snow on cover, cool color covers, takes place in cold settings, cozy scenes on cover, etc.)
December 15: Books On My Winter 2020-2021 TBR (or summer if you live in the southern hemisphere)
December 22: Books I Hope Santa Brings
December 29: Favorite Books of 2020