The Betrayal of Trust and A Question of Identity, Susan Hill 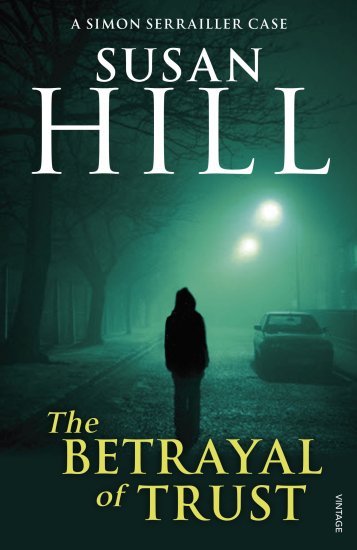 Ahhhh Lafferton. Possibly even more dangerous than Midsomer or a dinner party with Jessica Fletcher and Jane Marple!

I know. I know. It is a cheap rant to complain about the body count in a detective series… but Hill did have the opportunity to escape this cheap dig: Serrailler was linked to a nationwide task force and could have dissipated these serial killers across the country.

Something would have been lost though: this is an odd little series which, whilst it does have a detective element, is primarily focussed on the lives and loves of the Serrailler family – and by golly, they have been a tortured bunch under Hill’s writing! – and the atmosphere of Lafferton itself with the Cathedral, the Lanes, Cat’s farmhouse, Richard and Judith’s Hallerton House, recurring characters and an ebb and flow of threads. There are a range of things happening in one book as the aftermath of a previous book, or potentially setting up a future book.

It is almost a soap opera, with a detective as a main character, rather than a detective series. And Hill seems to be using the series and the setting to explore issues, giving the genre a literariness beyond the usual. I managed to dig out this quote from her website

I had never thought of writing crime novels because to me those had always meant ‘detective stories’ and although I enjoyed reading them, I knew I would be no good at the problem-solving sort of story with a series of dropped clues and a surprise ending. But the crime novel has become a serious literary genre over the last few decades and I realised that it presented the sort of challenge I wanted.
My aim was to look at issues in the world around me and contemporary life – which I have not done in my novels before. I also wanted to know not ‘who dunnit’ but much more importantly, WHY ? What motivates a criminal ? Why does someone murder and perhaps not only once ?

I think this explains both why I enjoy the series: I like the coziness and family elements, I like the detective elements, I like the literary thematic elements. I also enjoy the fluency and fluidity of Hill’s prose. But I also think it explains why I’m not blown away by them: these elements don’t quite gel for me and I find them almost competing rather than complementing each other. Perhaps like a fusion dish in a restaurant which doesn’t quite work.

As a detective novel, I found The Betrayal of Trust to probably be the most successful: the crime is uncovered early on as a rainstorm unearths the body of a dead girl who is rapidly identified as Harriet Lowther who had disappeared sixteen years previously. A single cold-case investigation which progressed naturally and fluidly. This being Lafferton, there is, of course, a serial killer! In this case, offering assisted suicide to the elderly, and the novel does explore the issues surrounding that, drawing in Cat as a doctor with her new lodger and medical student Molly. And it is done thoughtfully and carefully, exploring without judging for the most part from the point of view of the patient. And it is perhaps for this reason – that Hill wants to explore the issue without judging or becoming sensationalist – that his (or her – no spoilers) crimes, if that is what they are, are relegated to the subplot and are not in fact investigated at all within the book! That element is resolved in the gap between these two books.

In contrast, The Question of Identity doesn’t actually uncover a crime until about half way through the novel. Instead, we start with a flashback to the verdict of a trial ten years previously – a very significant trial for the book but in a form which is jarring within the series which hasn’t used it before – and we learn of the aftermath of the sub-plot in The Betrayal of Trust – Molly’s PTSD – and family tensions in the Deerbon household – a somewhat strained tension over Hannah’s failure to secure an acting role and Sam’s accidental success in securing one. I may be wrong but I don’t recall acting ever being raised as an interest either of the children had…

Both these books also give Simon Serrailler a new love interest. He has been, without a shadow of a doubt, an absolute shit towards women through these novels: there is something horribly juvenile in his refusal to commit, his endless friends with benefits, his meddling with other people’s feelings. And in these two books, he comes into contact with Rachel and falls madly in love with her. Instantly. Despite what my wife thinks, I am a romantic and I do believe in love – but Hill’s depiction of it did not strike true to me.

Afterwards, he asked himself time and again what it had been first, what he had noticed.
Eyes. Deep violet blue. Eyes of that colour were rare. And skin. He remembered his mother saying that everyone who met the Queen noticed her beautiful skin, as she herself had.
He had known handsome women, pretty women, attractive women, women with rare individual features – a wide, appealing mouth, or hair like Jane Fitzroy’s wild red curls. But of none could he have said, quite simply, that they were beautiful. How many women were?
Someone poured white wine into one of the glasses in front of him before he was aware of it. He pushed the glass slightly away….

She lifted her hand to reach for a pepper mill. She wore a wedding ring. But that might mean nothing. He had a strong feeling that it meant nothing.
How old was she? He thought younger than he was. Where was her husband? Partners were not seated together. He might be anywhere in the room.
Rachel Wyatt.

Obviously being married is no bar to our DCS Serrailler: “He had a strong feeling that it meant nothing”. How terribly convenient for him. And convenient for Hill because Rachel’s husband, Kenneth has been made an old man with Parkinson’s Disease, housebound and terminally ill and, therefore, an opportunity to explore her theme of terminal illness and its impact on others once more. By A Question of Identity, poor Kenneth Wyatt has given his “tacit agreement” to the relationship between his wife and another man.

The crime in A Question of Identity revolves again around the elderly: unlike the theme of assisted suicide, this is a straight out-and-out serial killer breaking into the homes of the elderly at night, dragging them from bed, tying them in front of the mirror and strangling them. The killer is quickly revealed to be the same killer as the one acquitted in the opening chapters ten years previously; the complication is that he had been granted a new identity as part of a protection programme for fear that he would be lynched following the acquittal. Serrailler at a police procedural level runs up against the blank wall of Special Branch’s secrecy; at a thematic level, Hill tries to explore what it is that gives us identity – our name, our relationships or our actions.

These are both good and interesting reads and clearly well written and worth at least four stars but, as with most of the series, the different threads are just slightly competing and don’t flow together enough to warrant five.

I will still be reading the series. My concern for the next novel is Richard and Judith Serrailler’s relationship: will domestic violence loom?

Rating: The Betrayal of Trust

Rating: A Question of Identity

Available: Amazon (Betrayal of Trust) and Amazon (A Question of Identity)