I am no historian and my knowledge of World War Two is pretty much skewed by literature as much as my knowledge of World War One is skewed by poetry. But literature of World War Two seems to have waited. Almost as if it were too horrific, too traumatic to digest. Much of the literature I’ve read has been very recent: The Book Thief by Marcus Zusak, The Boy In The Striped Pyjamas by John Boyne, Between Shades of Gray by Ruta Sepetys, The Midnight Zoo by Sonya Hartnett. Actually, looking at that list, they’re all Young Adult literature as well. But then you’ve got Catch-22, The Naked and the Dead, The English Patient, Atonement… and now All The Light We Cannot See. 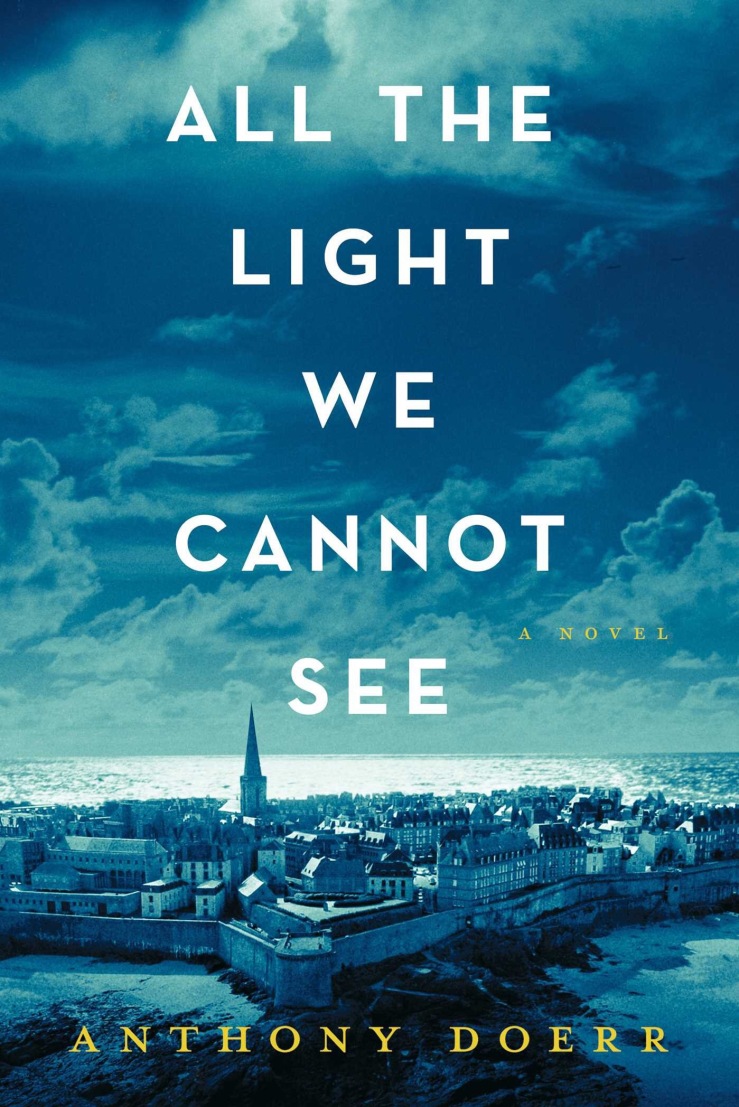 Let me start by saying that this is a beautifully written book! Doerr’s power of description and of using unexpected and beautiful imagery – almost synaesthetic at times – is exquisite. In part it needs to be, as one of his main characters, Marie-Laure LeBlanc, is blinded at the age of six by congenital cataracts and so Doerr has had to look to her other senses to furnish his descriptions. Let me quote one paragraph:

Color – that’s another thing people don’t expect. In her imagination, in her dreams, everything has color. The museum buildings are beige, chestnut, hazel. It’s scientists are lilac, lemon yellow and fox brown. Piano chords loll in the speaker of the wireless in the guard station, projecting rich blacks and complicated blues down the hall towards the key pound. Church bells send arcs of bronze careening off the windows. Bees are silver; pigeons are ginger and auburn and occasionally golden. The huge cypress trees she and her father pass on their morning walk are shimmering kaleidoscopes, each needle a polygon of light.

I’m not sure what research Doerr may have done amongst the visually impaired but this, to me, sounds both utterly accurate and lyrically beautiful. Stunning!

The story basically alternates between the childhoods of blind Marie-Laure and Werner Pfennig, an orphan in Germany from 1934 through to the siege of Saint-Mâlo in August 1944. Both characters were completely convincing and engagingly vulnerable as the familiar mechanics of the war ground in the background. And this novel needed the characters: it is not a novel, in my opinion, in any way about the war; it is a character centred novel revolving around these two children who, Marie-Laure tells us “grew up before we were grown up.” Both become embroiled in the war as France becomes occupied and Marie-Laure and her father flee from Paris to Saint-Mâlo and Werner’s skills get him drafted into to the National Political Institute of Education at Schulpforta. We witness the privations of war in Saint-Mâlo and the discipline of Schulpforta; the resistance movement in Saint-Mâlo and the atrocities committed in Schulpforta to decent people. We see how children were reduced to cogs in a machine.

And yet there was so much that was touching throughout the novel: poor short-sighted Frederick whose love of birds was so out of place at Schulpforta; the agoraphobic great-uncle Etienne whose radio played music for his brother who died in the war; the giant Volkheimer who hides a tender gentility and listen to “classical music. Mozart, Brahms, even the Italian Vivaldi. The more sentimental, the better.” Music and sounds permeate the air of this novel – quite literally – through the central image of the radio through which one person can inspire a child a world away, or maintain a network of family births, deaths and marriages, or reveal the location of enemy weapons.

Also at the heart of the novel is the mythical diamond, the Sea of Flames

“a brilliant blue, the blue of tropical seas, but it had a touch of red at its centre, like flames inside a drop of water… The Goddess of the Earth told him she’d made the Sea of Flames as a gift for her lover, the God of the Sea, and was sending the jewel to him through the river. But when the river dried up and the prince plucked it out, the goddess became enraged. She cursed the stone and whoever kept it… The curse was this: the keeper of the stone would live forever, but so long as he kept it, misfortunes would fall on all those he loved one after another in unending rain… But if the keeper threw the diamond into the sea, thereby delivering it to its rightful recipient, the goddess would lift the curse.”

The Sea of Flames is acquired by the National Museum in Paris before the war and then smuggled out – along with some decoy forgeries – by various members of the museum staff including their lock keeper, Marie-Laure’s father. At one level, the book is a simple adventure story in the style of Indiana Jones (with fewer whips) in which the corrupt Nazi von Rumpel tracks down a mystical gem.

But it is so much more.

I also love the fine line Doerr treads between dismissing the mythology of the Sea of Flames as superstition and hinting at the possibility that it could just possibly be true.

“You know how diamonds – how all crystals – grow, Laurette? By adding microscopic layers, a few thousand atoms every month, each atop the next. That’s how stories accumulate too. All the old stories accumulate stories. That little rock you’re so curious about may have seen Alaric sack Rome; it may have glittered in the eyes of Pharoahs. Scythian queens might have danced all night wearing it. Wars might have been fought over it.”

2 thoughts on “All The Light We Cannot See, Anthony Doerr”