The Curious Case of the Clockwork Man, Mark Hodder 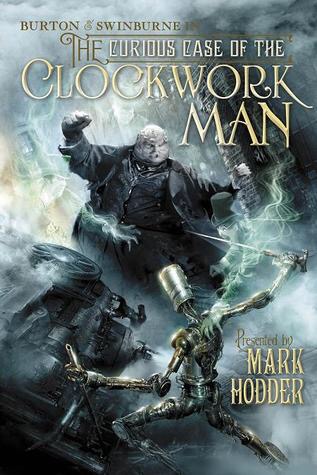 I’m going to ‘fess up here.

This is no great work of fiction. This is not a literary masterpiece. It is neither lyrical, resonant or thought-provoking – those three adjectives appearing more and more regularly on my blog as praise-words for novels. It does not sparkle with intriguing new metaphors; its prose does not ring with the clarity of a bell; its characters rarely emerge beyond sketchy two-dimensionality.

If you’re looking for these things, you’ll not find them in this book and you’ll be disappointed.

If, however, you’re looking for a good, rollicking, fun burst of inventiveness, you’ll be happy.

This is the second of Hodder’s Burton and Swinburne series and cracks straight on from the first, The Strange Affair of Spring-Heeled Jack. The same alternate reality Albertian London re-appears; the same range of inventively steampunk mechanisms and genetically engineered swans, dogs and parakeets return to fill its streets, run messages and transport people. This time, they are added to by insect carcasses, grown to immense sizes, hollowed out, powered by steam and used as public and personal transport. The VW Beetle becomes very literal! We are also re-acquainted with the familiar historical cameos of Lord Palmerston, Oscar Wylde, Charles Babbage, Isembard Kingdom Brunel and Florence Nightingale. These are now supplemented with Burke and Hare in a less grave-robbing incarnation than you might expect and the philosopher Herbert Spencer.

Hodder uses this second book to expand both the geography and mythology of his world: we see beyond London to the Tichborne estate; we learn of three giant black diamonds with mysterious and mystical powers. Fragments of these diamonds had been used in Spring-Heeled Jack’s time travelling suit in the first book; two are recovered through this one. The third book is clearly set up as a rescue mission to recover the third and final diamond.

As to the core plot here, it revolves around the real legal scandal – for more details of which you can read here – in which a purportedly lost aristocrat returns to reclaim his title. Apparently, despite overwhelming evidence against him which led to both his claim failing and a criminal case for fraud against him, the affair roused popular opinions and the imposter received immense public support.

Hodder develops a unique explanation for the support his version of the Claimant received. An explanation which involves mediums, wraiths, a horde of abjectly apologetic and verbose zombies as well as the black diamonds.

The battle towards the end of the book where the “well dressed, debonair and faultlessly polite” walking dead – who are absent for most of the book – have their day, apologising all the while, is ridiculously fun.

“I’m mortified,” one of them confessed as he jammed his fingers into a constable’s eye sockets. “This really is most despicable behaviour and I offer my sincerest apologies.”

Yes, the humour detracts from the tension in the climactic battle. But it’s fun!

Hodder’s imagination clearly steers towards the large-than-life and the grotesque – the Claimant himself is the obvious example. But he writes with enthusiasm and, I imagine, a broad grin. Is his dialogue convincing? No, not really. Is the description of Burton as “the famous explorer” too often repeated? Probably. Are his characters any more than over-drawn cardboard cutouts? Not particularly. Could you drive a horse and cart through plot holes? Probably, if you were so inclined.

Does it matter in this case?

It reminds me of The Avengers: over-the-top, very silly in places and hugely enjoyable.