When I was an impressionable teenager, which feels a long time ago now, I imbibed a lot of Arthurian legends. Arthur, Guinevere, Lancelot, Gawaine, Bedivere, Ector, Cai, Pelias, The Fisher King, Tristran, Iseult, Mordred, Morgana La Fey. And from there, at University, a unit on Medieval Literature reunited me with Gawain in Sir Gawain and The Green Knight ( or Sir Gawayn and þe Grene Knyȝt) which remains one of my favourite poems … and don’t get me started on the connections between that and The Lord Of The Rings. I even quite enjoyed the BBC show Merlin with Colin Morgan as an unexpected twist on the Merlin mythology. And Philip Reeve’s Here Lies Arthur. Oh and The Wasteland by T. S. Eliot.

So it was with a good deal of excitement that I learned of The Buried Giant by the author of The Remains Of The Day, Never Let Me Go and The Unconsoled, set in a post-Roman, post-Arthurian Britain. 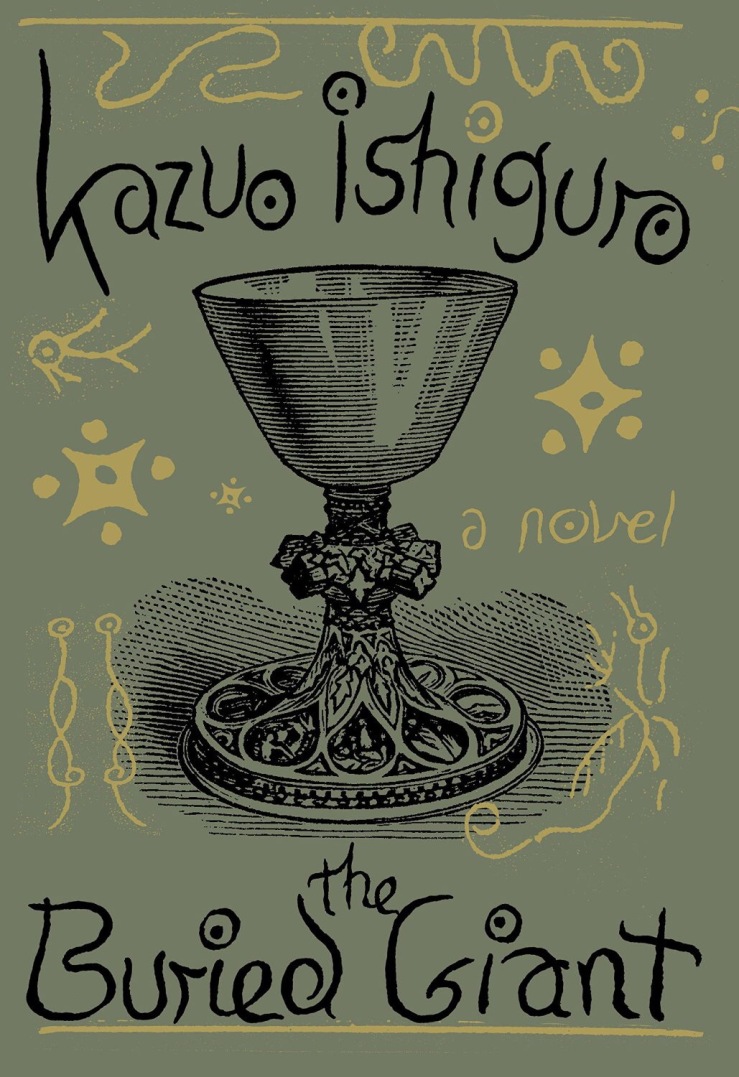 My hopes were stoked by the opening paragraph:

You would have searched a long time for the sort of winding lane or tranquil meadow for which Englamd later became celebrated. There were instead miles of desolate, uncultivated land; here and there rough-hewn paths over craggy hills or bleak moorland. Most of the roads left by the Romans would by then have become broken or overgrown, often fading into wilderness. Icy fogs hung over rivers and marshes, serving all too we the ogres that were then still native to this land. The people who lived nearby – one wonders what desperation led them to settle in such gloomy spots – might well have feared these creatures, whose panting breaths could be heard long before their deformed figures emerged from the mist. But such monsters were not cause for astonishment. People then would have regarded them as everyday hazards, and in those days there was so much more to worry about. How to get food out of the hard ground; how not to run out of firewood; how to stop the sickness that could kill a dozen pigs in a single day and produce green rashes on the cheeks of the children.

I was taken by the mixture of the historically aware voice, the matter-of-fact reference to ogres alongside the practicalities of life. I continued to like our introduction to the main characters, Axl and Beatrice, although “perhaps these were not their exact or  full names” who lived in a Briton village consisting of holes and burrows carved out from the hillside. I liked that. It felt like a nod to The Hobbit although Axl and Beatrice’s burrows were dark, cold and dank. Everything that J. R. R. Tolkien told us the deliciously middle-class Hobbiton was not.

And the dialogue, which we know Ishiguro has a keen ear for, did not work. It was neither stylised nor natural; neither faux-archaic nor modern. Long lengthy expositions from one character, uninterrupted, which rambled.

“You surprise us, Sir Gawain,” Axl said. “What do you mean by hiding yourself here?”
“I’ve been down here a while and walking before you, friends. Yet with this sword and armour and my great height, which forces me to stumble and go with bowed head, I can’t walk quickly and now you discover me.”
“You hardly explain yourself, sir. Why do you walk before us?”
“To defend you, sir! The melancholy truth is the monk have deceived you. There’s a beast dwells down here and they mean you to perish by it. Happily, not every monk thinks alike. Ninian, the silent one, brought me down here unseen and I’ll guide you to safety yet.”
“Your news overwhelms us, Sit Gawain,” said Axl. “But first tell us of this beast you speak of. What is its nature and does it threaten us even as we stand here?”
“Assume it does sir…”

And this continues. In the same vein for three more pages before they start moving again. Terrible news, betrayed, entrapped. And not a shred of emotion. Show don’t tell!

The central concept is a fabulous one: the memories of the entire nation have been lost – no specific memory but all of them. Girls go missing for a few hours and people forget what they are searching for. Parents forget that they have children and wander off leaving them unattended. Most don’t even remember that there has been anything to remember so don’t realise but Axl and Beatrice remember enough to recognise that something is wrong. They name the forgetfulness the “mist”. It is perhaps less a nationwide amnesia than a nationwide Alzheimer’s. I’m fairly sure the late lamented Terry Pratchett described his Alzheimer’s as a fog.

Anyway, they recall enough to remember that they once had a son and had once considered going to visit him. They decide to embark on a trip to his village to do so. On reaching a Saxon village, they acquire two more companions,  a Saxon warrior Wistan and a young boy Edwin who is thought to have been bitten by an ogre and cursed. Following an encounter with soldiers, they then meet Sir Gawain.

Here, Gawain has transformed from the courteous but perhaps flawed knight and heir to Camelot into a Don Quixote-ish aged warrior, tall and thin in rusting armour on a worn and haggard horse barely able to draw his sword which serves as a walking stick more than a weapon.

From Gawain, we learn that the mist of  forgetfulness may be being caused by the she-dragon Querig who happens to live conveniently nearby albeit well-hidden. Quests to protect or to vanquish the she-dragon abound involving mad monks and mysterious boatmen, devilish dogs and pesky pixies. And amid all this we learn more of Axl and Gawain and Querig’s pasts and atrocities committed by Britons on the Saxons. We learn that Querig’s breath was enchanted by Meelin to cause the memory loss in order to eradicate the memory of atrocity in order to forestall a cycle of revenge.

And therein lies the soul of the novel: the buried giant is the collective memory of national suffering – and also personal memory of sufferings and wrongs and resentments within a marriage or a family. How many of those wrongs have we all buried at both these levels? Are these hurts worth re-awakening? Is the truth worth the pain? Is there a difference between a self-imposed amnesia and one inflicted by another?

It also came across as an allegory of death: the various boatmen we meet seem to be echoes of Chiron; the mysterious island to which they ferry people has echoes of Avalon. It does seem like an awfully dull afterlife, though (if that’s what it is) where you’re unable to speak to anyone else. But then, if the level of dialogue and conversation is as it appears to be, that might be a blessing.

Now this is my other problem. I want to love this book. It is thoughtful, humane and resonant in its central ideas. It was written by Ishiguro. But I can’t love it. Because I don’t think it should be a novel. It is too symbolic, too allegorical. Perhaps too literary somehow for a novel. It would have made a cracking poem, perhaps.