This, for me, is probably your crowning glory. I loved the realism and naturalistic voice of Black Swan Green; I also loved the mysticism and scope of Cloud Atlas. The Bone Clocks incorporates both those elements whilst ramping up the fantastical into a breathtaking and deft novel. 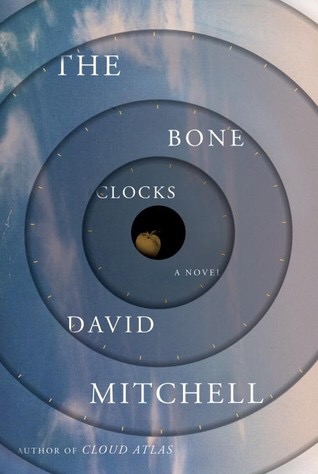 The novel most closely resembles Cloud Atlas in its structure: a range of interconnected stories narrated by a variety of characters. The connection between them, in this case, is straightforward: the character of Holly Sykes whose voice introduces the novel in 1984 as a fifteen year old girl; whose voice closes the novel as a seventy-four year old in a post-apocalyptic 2043; and who crosses the paths of each of the other narrators in between – Hugo Lamb, Ed Brubeck, Crispin Hershey and Iris Marinus Fenby. 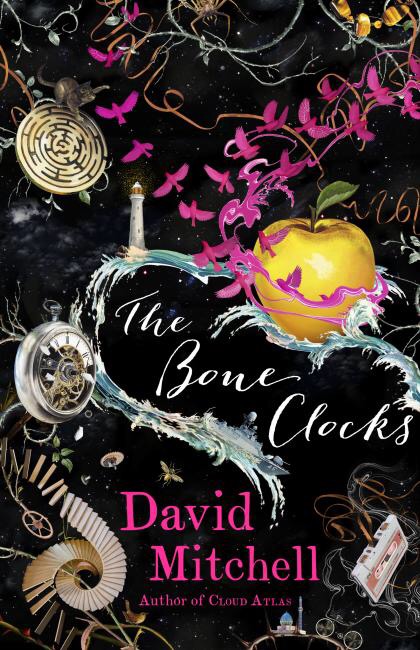 Each section works as a self-contained tale; and the whole is coherent, compelling and tragic. The way in which Mitchell incorporates his human voices into a fantasy cosmography and mythology is exquisite.

Let’s take a look at the different sections of the novel.

Our first introduction to Holly Sykes in A Hot Spell sees her escaping her parents’ pub and cheating boyfriend. Holly reveals that she had heard voices inside her head as a child, which she named The Radio People before being ‘cured’. As she walks, she encounters the equally teenage Ed Brubeck, an angling Esther Little to whom she agrees to offer asylum and a somewhat incomprehensible and unexpected encounter with a homicidal magical being. Following a quick memory swipe, we follow her off to The Isle of Sheppey where she picks fruit briefly before Ed Brubeck finds her to reveal that her brother, Jacko, has gone missing.

The second section, slightly oddly entitled Myrrh Is Mine, Its Bitter Perfume, a line from the carol We Three Kings, follows the Cambridge student Hugo Lamb in 1991. Ironically, that is one year before I entered Cambridge. The Cambridge depicted was not one I remembered – possibly as I wasn’t a member of the choral society, didn’t hang out with minor aristocracy and wasn’t groomed by societies of immortal atemporals. I was somewhat disappointed not to be approached by MI5! There did seem to be an element of caricature in the characterisation … but then, it was still a highly enjoyable caricature!

And I wasn’t a sociopath, which Hugo Lamb was. He seemed utterly devoid of conscience, ethics or morals, leaving friends dead, women used and the helpless cheated. And yet was somehow compelling. I liked him; and felt slightly dirty for doing so! He is also the deeply unpleasant cousin in Black Swan Green and the reveal there was a genuinely pleasurable ahhhh moment!

His encounter with Holly Sykes in a ski resort was brief and tender, offering him (and her) something akin to redemption.

The third installment, The Wedding Bash, set in 2004, was in my opinion the strongest and most tightly controlled section. Holly is now in a relationship with Ed Brubeck who is a war reporter for Spyglass Magazine, the same magazine featured in Cloud Atlas. They have a daughter, Aoife, and have amassed in Sussex for Holly’ sister’s wedding.

This section alternates between the domestic tensions in the Sykes-Brubeck household and Ed’s recollections of a near-death experience in Baghdad. Ed’s feeling of being torn between his world’s – domestic and international – was utterly convincing. As were his almost self-destructive interactions with Holly.

Perhaps the reason for the success of this section was the extremely light-touch fantasy elements.

It was a shame in some ways that it was succeeded by the weakest section, Crispin Hershey’s Lonely Planet set in 2015 following Crispin Hershey, author of Dessicated Embryos – a thinly disguised Martin Amis of Dead Babies fame – on the literary tour route as his career floundered. Partially as a result of a negative review of his most recent book by Richard Cheese man, whom we had previously met as an undergraduate friend of Hugo Lamb.

This section didn’t add much to the novel: Hershey was a self-interested and self-pitying egomaniac – without the delicious darkness of Lamb. We do see his character evolve, but it is one of the longest sections of the novel narrated by its least engaging voice. But it does serve to re-introduce both Lamb and the fantastical more concretely.

And that leads us to 2025 and An Horologist’s Labyrinth. This section explores the fantasy element to its full: its narrator is an atemporal immortal b
with psychosoteric powers of mind reading and control (scansion and suasion), telekinesis and others. Magic, in short. We learn of Horologists like Iris Marinus Fenby who reincarnate and Anchorites who decant others’ souls to achieve immortality. We learn of the war between them and the significance of 1984 and the offer of asylum becomes explicit.

This section could have stood as a fantasy element in its own right: the mythologising is deft and detailed, the characters convincing, the familiarity we have with Holly by this point, moving.

I was concerned that this book might not quite work, that the literariness and the fantastical might jar. But I was wrong. Save for the Hershey episode, I don’t think there’s a single misstep.

There is, however, one overwhelming message in this book: stock up on tampons and insulin in 2030. And move to Iceland.

Plucked from the Stacks

Roaming the Library One Book at a Time

“Words are, in my not-so-humble opinion, our most inexhaustible source of magic. Capable of both inflicting injury, and remedying it.” - Albus Dumbledore, The Deathly Hallows, J.K. Rowling

where monsters aren't all bad

A Kernel of Nonsense

the blurred line between reality and make-believe

Are You My Book?

A Bookish Blog by Keri

Your number one source for YA literature

Exploring What Captivates, Inspires, and Intrigues Us.

Alice and Her Bookshelf

Reviewing my way through the library

reviews, discussions, etc. -- all in light of God's Word

booksandlooks350306436.wordpress.com/
Diversity Between the Pages

Your stop for diverse Christian and clean reads fiction