I do love a book with a map in its cover!

I must confess I’m not entirely sure what this map adds to the book, but at a personal level, I used to live pretty much where Shardlake’s house is! Inside Lincoln’s Inn. Abutting Chancery Lane.

And that, pretty much, sums up the appeal of the Shardlake series, of which this is the sixth. They are familiar and comfortable. The Tudor era is familiar. The legal world of the Inns of Court are familiar. The recurring characters of Guy and Barak are familiar.

And there’s nothing whatsoever wrong with that. 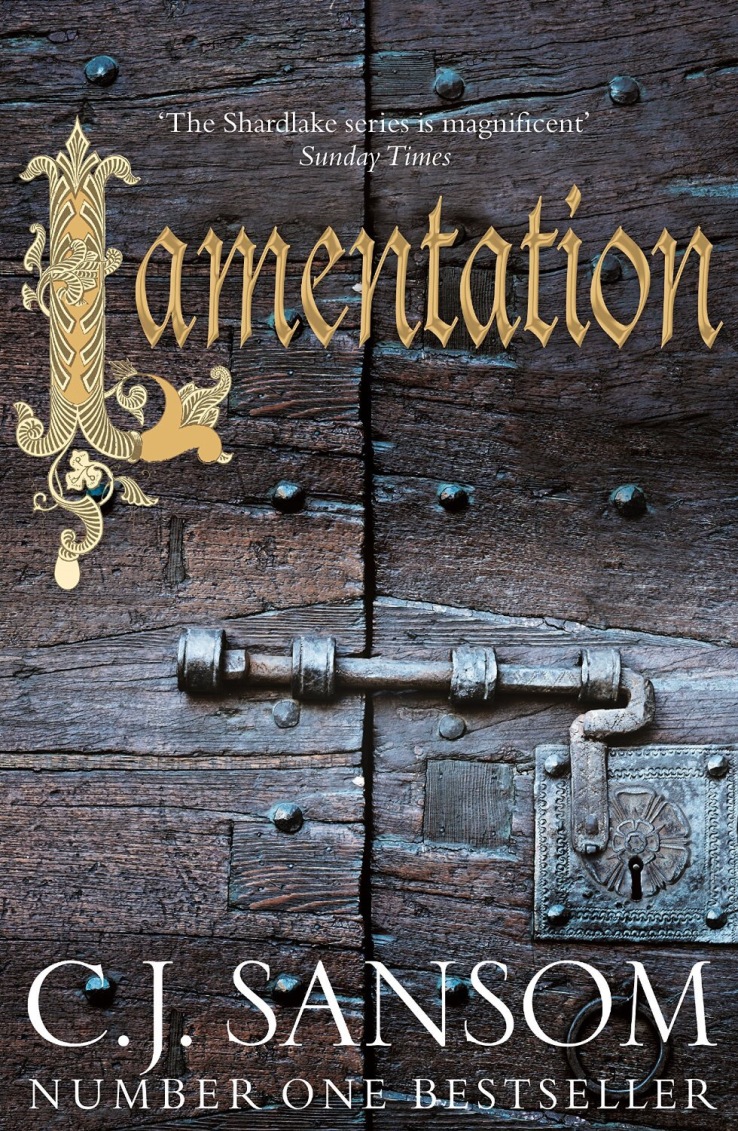 I have missed the two preceding novels, Revelation and Heartstone, but there’s nothing here that depends on a prior knowledge of those – or any previous Shardlake stories.

There are three interrelated plots within the novel: an ongoing bitter legal case which generates new friends and new enemies for Shardlake; an instruction from the Queen, Catherine Parr, to Shardlake to investigate the disappearance of a dangerous book; and domestic tensions within his own household. These plots alternate and weave together more successfully than I’d felt previous Shardlake novels had done. The conclusion twists deliciously and harrowingly for its protagonists – and the reader. And a continuation to the next book established in the epilogue. Shardlake is a cash cow that Sansom clearly intends to continue milking!

The book is very much a transitioning work: it marks a somewhat brutal retirement of Barak and Tamasin; the introduction of a new assistant, pupil barrister Nicholas; a complete gutting of Shardlake’s own household; and, of course, the anticipation of the death of one King and succession of another. I’ll miss Barak, who I hope may make guest appearances in the future, and particularly the somewhat fiery Tamasin, although Nicholas has promise as a character.

So, beyond the comfort and familiarity, what does the book offer? An effective enough depiction of the final months of Henry VIII’s reign as a time of religious and political turmoil. There are a few slightly clumsy expositions of Anabaptists and Lollards – the benefit of Nicholas’ role: the worldly Barak wouldn’t have needed the history lessons! Plot points were repeated slightly too frequently for my liking: Shardlake sometimes ruminated on the plot to himself, reported to the palace and then discussed the case with Barak later. I would like Sansom to have a little more faith in my ability to keep up. Similarly, the machinations of the Court politics and the ruse and fall of traditionalist or reforming sympathisers was expounded too much. And if another person commented that Secretary Paget followed the King and did not seek to lead him, having learned from the mistakes of Wolsey and Cromwell one more time, I might have … tweeted angrily!

Perhaps I have been spoiled though. After Wolf Hall and Bring Up The Bodies, almost every depiction of Tudor London will seem … Well, monochrome.

I’d also have liked the trail to have been a little less obvious. Shardlake – to me – needs to be piercing in his intellect and perspicacity. Here, his investigations were a little ‘plodding’: only four people had access to the Queen’s room when her book was taken, so he interviewed them and followed the leads. A murder had been committed and the neighbour had disturbed the murderers, so he interviewed them and followed the leads. I did wonder once or twice what Shardlake offered the investigation which others couldn’t provide beyond what we might nowadays call plausible deniability for the Queen.

I was also rather more interested in the legal case of the Slanning painting than Sansom seemed to be. For me – abd I fully accept it is possibly just because of my legal background – I’d have liked that explored further. The darkness eventually revealed, again, seemed a little convenient.

What Sansom has produced and offered is a well plotted, well paced, tense political thriller with a likeable cast. The tour-de-force moment, however, is the brooding, terrifying and corrupted presence of the king which presides over the novel.