Between Shades Of Gray, Ruta Sepetys

This is a very powerful book: all the more powerful and painful as it is based on historical fact and first-hand accounts.

Lina is a fifteen year old Lithuanian school girl, a talented artist, a member of a loving family. In 1941, caught between Hitler’s fascism to the west and Stalin’s communism to the East, Lithuania was invaded and annexed by Russia and Stalin ordered the deportation of thousands of people to prisons, slavery and work camps. Lina and her family become one of them.

The book opens with the NKVD assaulting Lina’s home and taking her in the middle of the night. The novel then moves in three sections: the horror of the train carriage in which they are imprisoned to travel weeks across Russia; their time in a Siberian beet farm; and finally their further deportation into the arctic circle.

Be careful before choosing to read this book: the horrors and deprivations faced by Lina are not shied away from here. There are moments of violence, brutality, horror and abuse. That said, there are also images of hope: Lina’s drawings, the stone that Andrius finds and gives Lina, moments of generosity from people who have nothing; characters who show dignity in the worst situations; characters whose basic goodness comes out in the painfully few times they can show it.

A hugely powerful book and shortlisted for the Carnegie Medal. I do question whether it is really appropriate for a Young Adult / Secondary School readership? I’d be careful advising anyone under KS4 to read this! 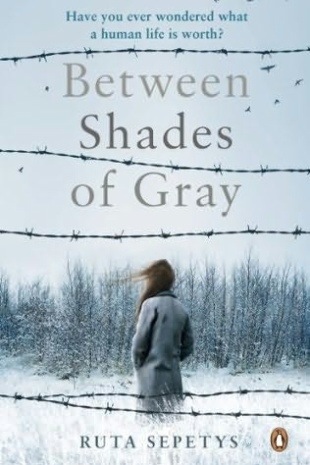