A lovely and somehow old-fashioned adventure tale. Somehow reminiscent of Enid Blyton… As well as the plethora of games you can get now where you investigate various settings, find clues, use them to unlock new rooms…

This is a Carnegie 2012 shortlisted tale and very much aimed at the lower end of the age bracket: the main character Stuart is 10 years old and that gives a strong clue as to it’s intended audience. Some older readers may find it a little light. Personally, I started reading it at four o’clock and had finished it by nine o’clock, having made tea in the middle!

Stuart is made to move homes at the start of the summer holidays because his mother has a new job. Aside from mild annoyance, don’t expect family angst or emotional trauma from that fact! He moves to his father’s home town of Beeton: quiet, Midlands and rather dull. There he discovers that his Great Uncle was a stage magician (why wouldn’t his dad have said before?!) and had given his father a money box years before. Opening the money box, Stuart discovers a horde of old three penny pieces which then inadvertently lead him onto a trail of clues to discover his long lost secret magic workshop. There are friends made along the way; enemies thwarted; clues deciphered; perhaps even true magic discovered.

Small Change … was, I felt, a good read. Younger readers will enjoy it and I am sure there will be a number of people for whom this is the book that turned them on to reading.

A good book however demands that the reader give it time; a good book has me reaching for a pen to highlight and annotate. The margins of Small Change … are – in my copy at least – as clean as the day it left the print run! 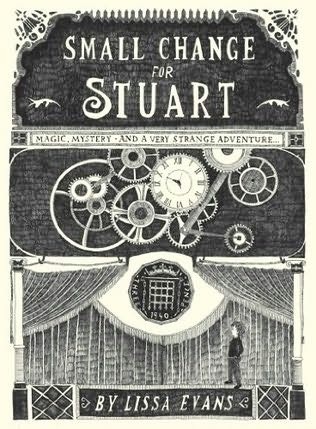