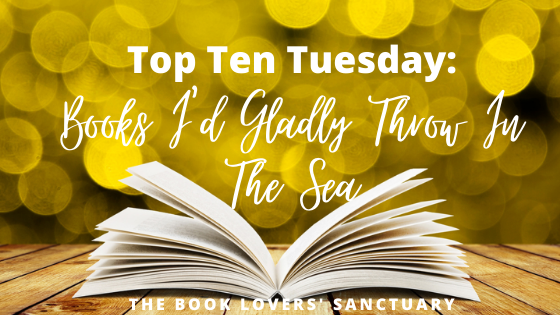 Why would anyone throw a book into the ocean? I mean, a book is a poor quality building material for bridges, piers or other water based works – the paper doesn’t hold up to construction usage. Too absorbent, you see: it gets soggy.

So I can only assume that the topic is asking for books that you want to dispose of, to destroy for all prosperity by throwing it into the sea, and this I so not get. A book may not be to my taste – indeed, many many books are not – but I would never throw that book into the sea, literal or proverbial. Why deprive another person of a book they might enjoy by doing that? Why throw that insult into the author’s face? Even a book I dislike will be the product of hard work and effort.

And this idea feels so negative, whereas after the Easter weekend, we should all be looking forward to the future with hope and optimism – and a summer with the potential for freedom and the chance to spend time with friends and family!

So for this topic I am assuming that I would throw these books into the sea for one reason only: that the sea is contained, featured and explored within the pages of the book itself.

And the sea is a potent and powerful symbol in culture: an image of chaos in the bible until tamed by God

And it was also the waters which flooded the earth.

The sea is redolent of mystery and of the unknown, often the unknown threat swimming through the murky depths unseen – so powerful in films like Jaws, at least until the limits of the special effects were revealed to a modern audience, but then The Meg with Jason Statham was not exactly an improvement despite the CGI developments.

And the ocean is also connected with feminine sexuality. Some of the monsters of the deep in the novels below are, let’s face it, deeply phallic (I am looking at you, here, Melville) and others are far more seductively feminine if no less dangerous.

The Grand-Daddy of them all!

I adore the anarchaic, bloated beast that is Moby-Dick!

I love the characters – Starbuck, Stubb and Flask; Queequeg and Ishmael; Pip. And of course towering over them all, Captain Ahab – monomanical, absurd, Shakespearean, a nautical King Lear.

And The Pequod, described to us, along with the grim business of whaling, with stunning realism alongside an horrific Hellish symbolism.

And of course the ocean on which The Pequod and its crew sail – the ocean in which Moby Dick himself swims – is potent as a character in its own right. The sea with its

wondrous depths, where strange shapes of the unwarped primal world glided to and fro before his passive eyes; and the miser-merman, Wisdom, revealed his hoarded heaps; and among the joyous, heartless, ever-juvenile eternities, Pip saw the multitudinous, God-omnipresent, coral insects, that out of the firmament of waters heaved the colossal orbs.

It seems very telling that Pip is called mad thereafter!

And The Ocean Was Our Sky, Patrick Ness

This tiny novella – easily readable in a single sitting – nearly passed me by. And I love Patrick Ness!

This is not the usual Ness book though – nothing like the Young Adult adventures of Chaos Walking or More Than This or the mythic folklore of A Monster Calls. This is Moby Dick inverted, the whales’ story…

And it feels prescient, powerful and far more than the sum of its pages.

I adore Miéville: he seems to have turned his hand, and his imagination, and his prestigious vocabulary and overt socialist politics to every genre going. And my introduction to him was his fantasy Bas-Lag trilogy of which this is the second novel and it owes a lot to Moby Dick.

The avanc, the monstrous levaithan that lurks in the depths and is harnessed by the floating city…

Oh, a floating city of pirates, vampires and scholars, pursued by mermaids.

And more fantastical beasts inhabit the ocean in Francis Hardinge’s glorious Deeplight! Or in fact the Undersea, a layer of ocean beneath the ocean in which Gods used to swim in vast Lovecraftian shapes.

Used to swim. Because as the novel opens, those Gods are dead and being salvaged for parts to be used in technological devices.

But in the sea, the cradle of life, things rarely remain dead… even when we wish they would!

The Survivors features a community in a relationship with the sea: it is the source of their income through fishing and tourism; it is also an ever present danger – more present and more dangerous than the murderer in the town!

The fact that this is a town – described with Harper’s trademark sense of place and community – which commemorates survivors of the sea in the eponymous statue says a lot!

Yann Martel’s novel explores the sea in all its beauty and horror, its vastness and its majesty, its life and its violence. Somewhere between the allegorical and historical, the magical and the realist, Pi was a wonderful creation – as is the tiger Richard Parker.

And the ocean itself with its carnivorous islands and charm and beauty and ferocity.

And for 211 pages, we are adrift on that sea alongside Pi. That is a large portion of a 354 page novel!

I can remember parts of this book well but feel that the whole shape of it has slipped from my memory.

It was shortlisted for the Booker back in 2011 and felt a little like a Victorian Life of Pi.

A young lad faces down a tiger in Victorian London and ends up working for and then setting sea in the employ of the historical and enigmatic Jamrach in search for a dragon.

Shipwreck, cannibalism and survival… all echoes of the events surrounding the shipwreck of the whaling ship Essex in 1820, which itself is an inspiration for Moby Dick and of course, as a barrister in a previous life, the legal case of R v Dudley and Stephens in 1884. That case also featured a Richard Parker, who was cannibalised by Messrs Dudley and Stephens – and necessity was declared no defense to a charge of murder.

Into The Drowning Deep, Mira Grant

Literally finished this one this week and the concept was a blast! Imagine an entertainment company (perhaps, I don’t know, Disney) accidentally discovering that mermaids were real, because they attacked one of their ships and ate everyone!

And then they sent a second ship to investigate – or to redeem the company at least.

Great fun – not the best writing or characters if I am honest – but the sea and its denizens were definitely more engaging than the human characters!

This historical novel, like The Survivors, features a community in a difficult relationship with the sea. We are back in 1617 so we are not talking tourism – and the island of Vardø is so uncompromisingly bleak that the idea is laughable – but fishing.

A fishing community that has accommodated both the Christian and the Sámi, and which is devastated when a storm kills all the men on the island.

And women step into their shoes.

And when women show that they are just as capable as their menfolk, of course allegations of witchcraft are thrown at them!

And the sea is always there, even if on occasion it throws up the bloated corpse of a whale from time to time.

This was a strange book… mermaid erotica feels a little reductive but, perhaps married with insightful social satire and an exploration of what it is to be a woman in the modern world, it isn’t far from the truth.

Broder’s novel takes us to the sea and to the semi-permeable barrier between us and it as her main character Lucy meets, falls in love with and has sex with her merman – and a number of other characters too, thanks to Tinder.

And the offer to come into the ocean, to be part of the ocean, perhaps a death, perhaps a rebirth was simultaneously deeply appealing – life on land held few joys for Lucy – and terrifying.

So, that is my slant and take on this week’s topic – and a slightly later posting than usual thanks to sudden and unpredictable snow and hail showers that necessitated a quick dash back to bring donkeys into their stable this afternoon! And the demands of a seven year old child loving having my attention!

Apologies to Beauty & Her Books if I have twisted her topic!

As always, I love to hear your responses and thoughts and as it is the holidays I shall endeavour to reply and check out more of your TTT posts this week.