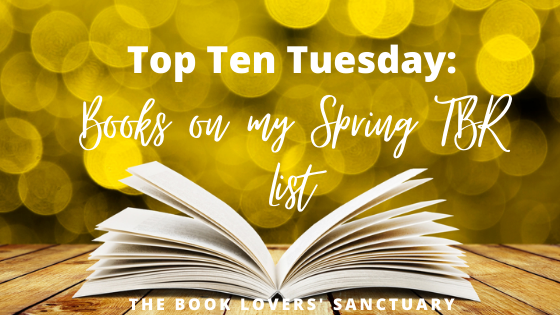 This has been a terrible week in many ways with so much division and fear and violence and threat on the streets of London – Sarah Everard’s disappearance and murder, the mishandling of the vigil, the wave of awareness of the fear women feel on our streets and their hypervigilance which has been vocalised by colleagues, by MPs in Parliament, by school children. It has been a week that has stunk of betrayals: betrayals by men, betrayals of men by our own gender, betrayals by the police.

It has been a week that has saddened me genuinely.

So it is great to have something to look forward to, and the small pleasure of a new book can give some respite from the world and teach us so much more about the compassion we need to show one another.

It does raise one problem though. Ten? How am I meant to select just ten from the mountainous TBR list before me? And Springtime is a difficult one for me as two of my favourite book prizes release their longlists in February and March and they make up the majority of my list, along with those books that have lingered on it for a while, and new books that have caught my eye or imagination.

My current reads, before my TBR, though

Mermaids are real and vicious and, having lost one ship and crew to them, an entertainment company send out a second to investigate… What could go wrong?

I am currently waiting for, well, more mermaids! The people on the second boat seem to be a mixture of naive and unlikeable and we are currently playing the “who will die first” game!

It is very rare for me to re-read anything – and perhaps it is because I first read this in audiobook format that the re-reading works. That and Mantel’s wonderful prose.

Klara and the Sun, Kazuo Ishiguro

Ishiguro is always wonderful as a writer, whether exploring the domestic lives of the understairs in The Remains of the Day or the humanity of clones created for their organs in Never Let Me Go. So any new book by him is an event.

And I can think of few writers I would be more likely to trust with the exploration of identity in an AI – an issue which does seem very prescient.

From her place in the store, Klara, an Artificial Friend with outstanding observational qualities, watches carefully the behaviour of those who come in to browse, and of those who pass in the street outside. She remains hopeful a customer will soon choose her, but when the possibility emerges that her circumstances may change for ever, Klara is warned not to invest too much in the promises of humans.

The Women’s Prize for Fiction

The Vanishing Half, Brit Bennett

This has been on my TBR for so long and I’ve not got around to it, so hopefully its presence on the Women’s Prize longlist – suspiciously, the web page seems always to open on it too – will prompt me to finally read it!

The Vignes twin sisters will always be identical. But after growing up together in a small, southern black community and running away at age sixteen, it’s not just the shape of their daily lives that is different as adults, it’s everything: their families, their communities, their racial identities. Ten years later, one sister lives with her black daughter in the same southern town she once tried to escape. The other secretly passes for white, and her white husband knows nothing of her past. Still, even separated by so many miles and just as many lies, the fates of the twins remain intertwined. What will happen to the next generation, when their own daughters’ story lines intersect?

Love the sound of this one: there is something about the setting, on the cusp of modernity, on the brink of equality but not there yet…

1957, the suburbs of South East London. Jean Swinney is a journalist on a local paper, trapped in a life of duty and disappointment from which there is no likelihood of escape.

When a young woman, Gretchen Tilbury, contacts the paper to claim that her daughter is the result of a virgin birth, it is down to Jean to discover whether she is a miracle or a fraud.

As the investigation turns her quiet life inside out, Jean is suddenly given an unexpected chance at friendship, love and – possibly – happiness.

But there will, inevitably, be a price to pay.

This sounds wonderfully Strangers on a Train like, but possibly moving into something else…

Intelligent, bookish and hard-working, Hannah is part of a generation that grew up in hope and has tried to escape life in Cornwall’s ugliest coastal town through a university degree, a professional career, and marriage to the privileged Jake. However, her life has gone disastrously wrong. Jake has left her for Eve and, reduced to near penury, she is desperate enough to agree to murder the brutal husband of Jinni, the rich woman she meets in the First Class carriage of the London to Penzance train, in return for having Jake killed.

However, when Hannah turns up at the remote Cornish house where Jinni’s husband is living intending to keep her promise, she meets a filthy, drunken, despairing man living in a house whose misery tells a very different story.

This reminds me of Daisy Johnson’s Everything Under which I loved, so I hope this lives up to my epectations.

What if the life you have always known is taken from you in an instant?

What would you do to get it back?

Twins Jeanie and Julius have always been different from other people. At 51 years old, they still live with their mother, Dot, in rural isolation and poverty. Inside the walls of their old cottage they make music, and in the garden they grow (and sometimes kill) everything they need for sustenance.

But when Dot dies suddenly, threats to their livelihood start raining down. Jeanie and Julius would do anything to preserve their small sanctuary against the perils of the outside world, even as their mother’s secrets begin to unravel, putting everything they thought they knew about their lives at stake.

How the One-Armed Sister Sweeps Her House, Cherie Jones

I do love the combination of the Caribbean setting, and of women finding inspiration from a tale intended to limit them!

In Baxter’s Beach, Barbados, Lala’s grandmother Wilma tells the story of the one-armed sister, a cautionary tale about what happens to girls who disobey their mothers. For Wilma, it’s the story of a wilful adventurer, who ignores the warnings of those around her, and suffers as a result.

When Lala grows up, she sees it offers hope – of life after losing a baby in the most terrible of circumstances and marrying the wrong man.

And Mira Whalen? It’s about keeping alive, trying to make sense of the fact that her husband has been murdered, and she didn’t get the chance to tell him that she loved him after all.

I fear with this one, with two sets of sisters in parallel lives of carer and caree, I may get confused about the names! But considering recent events in London, novels around consent seem very timely.

Saskia and Jenny are twins, alike in appearance only: Saskia has a single-minded focus on her studies, while Jenny is glamorous, thrill-seeking and capricious. Still, when Jenny is severely injured in an accident, Saskia puts her life on hold for her sister.

Sara and Mattie are sisters with another difficult dynamic: Mattie needs almost full-time care, while Sara loves nothing more than fine wines, perfumes and expensive clothing, and leaves home at the first opportunity. But when their mother dies, Sara must move Mattie in with her.

Gradually, Sara and Saskia learn that both their sisters’ lives, and indeed their own, have been altered by the devastating actions of one man…

The Girl Who Became a Tree, Joseph Coelho

I do love a retelling of Greek myth and Coelho’s verse novel is on the Carnegie Medal longlist. They do like their verse novels, this prize!

Daphne is unbearably sad and adrift. She feels the painful loss of her father acutely and seeks solace both in the security of her local library and the escape her phone screen provides by blocking out the world around her.

As Daphne tries to make sense of what has happened she recalls memories of shared times and stories past, and in facing the darkness she finds a way back from the tangle of fear and confusion, to feel connected once more with her friends and family.

The Pisces was a weird, hilarious at times, disturbing and unsettling novel exploring a mental and emotional collapse. And merman sex. I’m expecting weirdness again here!

Rachel is twenty-four, a lapsed Jew who has made calorie restriction her religion. By day, she maintains an illusion of control by way of obsessive food rituals. At night, she pedals nowhere on the elliptical machine.

Then Rachel meets Miriam, a young Orthodox Jewish woman intent upon feeding her. Rachel is suddenly and powerfully entranced by Miriam – by her sundaes and her body, her faith and her family – and as the two grow closer, Rachel embarks on a journey marked by mirrors, mysticism, mothers, milk, and honey.

‘Kill us? They’ve never needed to kill us,’ said Lamb. ‘I mean, look at us. What would be the point?’

A year after a calamitous blunder by the Russian secret service left a British citizen dead from novichok poisoning, Diana Taverner is on the warpath. What seems a gutless response from the government has pushed the Service’s First Desk into mounting her own counter-offensive – but she’s had to make a deal with the devil first. And given that the devil in question is arch-manipulator Peter Judd, she could be about to lose control of everything she’s fought for.

Meanwhile, still reeling from recent losses, the slow horses are worried they’ve been pushed further into the cold. Slough House has been wiped from Service records, and fatal accidents keep happening. No wonder Jackson Lamb’s crew are feeling paranoid. But have they actually been targeted?

This one is a bit of a cheat: I have been persuaded that the entire Slough House series of which this is the seventh is worth a good read as a great British espionage thriller!