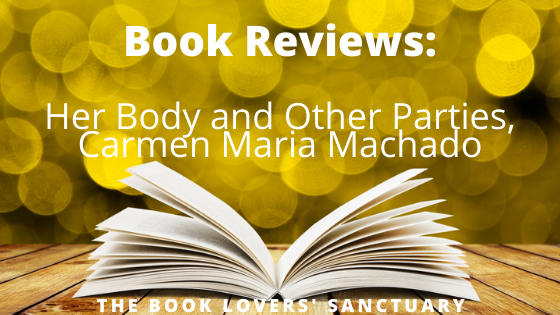 Stories can sense happiness and snuff it out like a candle.

I have a certain weakness in my reading, and that is fairytales. Fairytales that cleave to the dark and unnerving quality of pre-Disney versions. Fairytales which are anything but children’s stories. Angela Carter’s The Bloody Chamber is one of my favourite books and a regular re-read and this quotation –

is one that I carry in my heart.

It is not often that I would compare a writer to Angela Carter – but, at their best, Machado’s collection of visceral, queer, seductive and disturbing stories is a on a par with her.

Save that, in this world, women have a ribbon tied around one part of their bodies – maybe an arm, a wrist or a foot – and our narrator’s is around her neck. No explanation is given in the narrative. It is a fact of life and, like the narrator’s son in his childhood, we have to accept it as a fact. And as a symbol it is so redolent with meaning: it is beauty and fragility and intimacy and vulnerability and identity and solidarity all rolled in together. And the only real conflict between the characters is the husband’s desire to touch and to untie the ribbon and the narrator’s simple denial of that:

“A wife,” he says, “should have no secrets from her husband.”

“The ribbon is not a secret; it’s just mine.”

It is also a story replete with stories, fairytales, urban myths and horror stories. Stories of women dying in graveyards, dying from poisoning from the embalming fluid steeped into a wedding dress, of a girl adopted by the wolf pack that slaughtered her parents. Stories of a husband who

jokes around with the doctor as he holds my hand.

“How much to get that extra stitch?” he asks. “You offer that, right?”

“Please,” I say to him. But it comes out slurred and twisted and possibly no more than a small moan. Neither man turns his head toward me.

The doctor chuckles. “You aren’t the first—”

The husband stitch – hopefully no more than an urban myth, but the sort of atrocity that I can imagine being true, however horrific – is an extra stitch given after an episiotomy to tighten the vagina to increase the husband’s sexual pleasure. For the world of the story to be one where men can joke and chuckle – that verb, “chuckle,” is awful – about it is such a deeply, horribly misogynistic conceit. And the semantic field between ribbon and stitch feels deeply telling.

This is a feminist collection, and a Sapphic one, but most of the stories do not dwell on conflict between genders or even characters. Most characters are queer, but a queerness that did not create conflict in itself, in a world that was not explicitly homophobic or misogynistic, but where those prejudices were translated into other constructs and conceits like the ribbon: girls faded into insubstantiality in Real Women Have Bodies, ghosts of girls are voiceless and have bells for eyes in Especially Heinous, and women’s bariatric surgery formed an additional presence in Eight Bites.

Not all the stories work for me. Especially Heinous in particular was ambitious in scope – it converts the episode summaries of all the episode of Law & Order: Special Victims Unit into a twisted alternative narrative. It is a clever conceit. If we compare a couple of episode summaries from IMDB and the story version we can see how the narrative spirals away from the source whilst remaining anchored in their titles.

Stabler and Benson investigate the murder and castration of a New York cab driver. They discover that the victim had assumed the identity of another man because he himself was wanted by police.

Stabler and Benson investigate the castration and murder of a New York City cab driver. They discover that the victim had assumed the identity of another man years before, because he was wanted by police. In the end, Stabler discovers that the stolen identity of the man in question was also stolen, and he and Benson have to begin the investigation all over again.

Police find a female forensic psychiatrist unconscious and bound in a basement, along with would-be rapists. She turns out to be the author of a book about rehabilitating convicted sex offenders. The detectives identify one of her patients as a suspect, and ask the doctor for his records, but they disappeared when her office was vandalized shortly after she left the hospital. A tape that disappeared during the break-in is brought to police by another suspect’s sister, which leads the investigation to focus on victimology.

“Your mother called today,” Stabler’s wife says to him. “Please call her back so I don’t have to make an excuse for you.” Stabler looks up from his desk, where the manila envelope is resting, so anemically thin he wants to scream. He looks over at the mother of his children, the hollow at the base of her throat, the fine fringe of her eyelashes, the fat zit on her chin that she is probably minutes from popping. “I need to talk to you,” he says.

This exercise undermines our appetite for sexual violence as entertainment perhaps, taking us to a strange place – somewhere haunted and baroque – where Benson

reaches down and touches the pavement. It is breathing. Its two-toned heartbeat makes her clavicle vibrate. She can feel it. She is suddenly, irrevocably certain that the earth is breathing. She knows that New York is riding the back of a giant monster.

Resident contained some genuinely disturbing visceral images – Cronenberg-esque – of the narrator’s body erupting in boils and pustules and her attempts to lance them.

I inserted the pin into the original abjection. It resisted only briefly—a split second of thrashing fists before yielding—and then discharged. A limb of pus and blood climbed the stalk of the needle before collapsing under its own weight and trailing down my leg like an untended menstrual cycle.

I loved the physicality of the writing style in all these stories, even the ones which I felt did not quite work – and Machado is so good at investing the commonplace and familiar with so much horror and meaning. Even something as familiar as our own bodies.

This was truly an exceptional, if slightly uneven read.

4 thoughts on “Book Review: Her Body and Other Parties, Carmen Maria Machado”