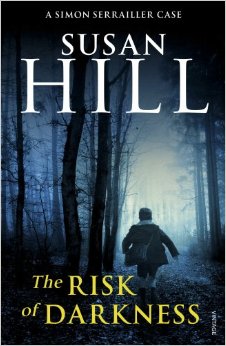 This will be a fairly brief review for two reasons: firstly, I thought I’d already reviewed it and only realised when I tried to link my review of The Vows of Silence to it that I’d not; and secondly, it is very much a continuation of the second novel, The Pure In Heart.

Serrailler is summonsed to Yorkshire to help investigate a lead in the kidnapping and (presumed) murder of David Angus, leading him to effect the arrest of the kidnapper, Edwina Sleightholme, in a surprisingly and refreshingly thrillerish moment fleeing down a Yorkshire cliff face – a moment that was a tad reminiscent of The Woman in Black or of something Hitchcockian.

Hill is a writer who has gone on the record to say that she is less interested in the whodunit than the why-dunnit, so I was anticipating something thoughtful and interesting in the presentation of Sleightholme. And was slightly disappointed. There was no real exploration of the mind of a killer. She is portrayed pretty much as simply evil – a word I have trouble with – who just did because she wanted to. After the genuine emotional horror of The Pure in Heart in which the repercussions of the abduction are seen on the family, the explanation and the presentation of the killer were bland. And maybe that was entirely the point. That the monstrous wears the same banal face as the rest of us.

Other tragedies and crimes took place too and interweaved with new characters: Max Jameson lost his wife Lizzie to Creutzfeldt-Jacob disease – an unusual and odd disease to choose perhaps – and his grief led to increasingly bizarre confrontations including holding the new pastor Jane Fitzroy hostage in her own home. Serrailler eventually talked him round to releasing Fitzroy who quickly became a friend of his sister, Cat Deerbon, and lined up as a love interest for Serrailler. It was a nice breath of fresh air in the Deerbon household where some very tedious arguments about GP working conditions were held ad nauseam.

As often happens with the series, it is slow and gentle and meditative – with the exception of the scene on the Yorkshire cliffs – and I vacillated between enjoying that meditativeness and finding it slightly tedious. I didn’t find the Max Jameson plot line convincing as an exploration in either crime or grief, nor the presentation of Sleightholme. What I did like was the reaction of Sleightholme’s mother to her daughter’s arrest: the shock and denial and obsessive rejection of the truth.

1 thought on “The Risk Of Darkness, Susan Hill”