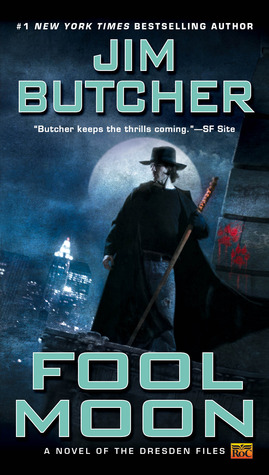 Book Two of the Dresden Files.

This time around, we have werewolves!

Seriously, there’s not much more to say: it’s smart and sassy, it’s got magic and werewolves. It is not high literature! It’s a decently written, fast paced, fun read!

Oh, you want to know the plot? Well, let’s see. A mutilated body is discovered with paw prints near by which were the footprints, Mr Holmes, of a gigantic hound. Or a wolf. Maybe.

Karrin Murphy, investigating the death, consults Harry Dresden and we discover two things. The dead man is an employee of the local crime boss, Johnnie Marcone, which generates its own subplot in which Marcone attempts to employ Dresden as protection; the wolf-prints lead Dresden to a group of youths, apparently led by the mysterious Tera West and possibly werewolves. And then another gang of werewolves are uncovered, the Streetwolves. And the FBI are involved, investigating Karrin Murphy.

The plot becomes terribly convoluted and faintly ridiculous at times and Harry Dresden is thrown around like a dog’s chew toy from one group to another: arrested by the police and FBI, rescued by the Alphas; kidnapped by the Streetwolves, rescued by the FBI. Different groups of people are different forms of werewolves. The most powerful of which may be Harley MacFinn, a loup-garou, who we do get to see in full murderous carnage-driven wolf form tear apart a police station. MacFinn is also Tera West’s boyfriend. A decent editor could have trimmed some fat from it all. But, at the end of the day, it’s a whole load of werewolves!

Butcher does linger just a little too long on the female form for me. A little bit like that creepy uncle at family get-togethers who doesn’t quite meet your eye. I suppose it is inevitable and unavoidable with werewolves and transformations that nudity occurs. Tera West in particular is naked an awful lot and described a little too much – distracting the police who were guarding Harry’s home by parading past them naked for example. She was, however, an engaging and captivating character (as well as being naked): unlike the other werewolves and hexenwolves and loup-garous, Tera West was a real wolf who could transform into a human. Her transformation in the final confrontation was actually very effective and well-delayed by Butcher as we suddenly saw her full power and grace

“Where the other wolves were fast, Tera was fast and graceful. Where the others were quick, she was quick and elegant. She made them look like amateurs.”

Will I read more of the series? Yes of course I will! It’s got all the intellectual bite of a popcorn kernel but sometimes that is all you need! It is the written version of sitting down with an MCU film on. Switch off and enjoy the ride.