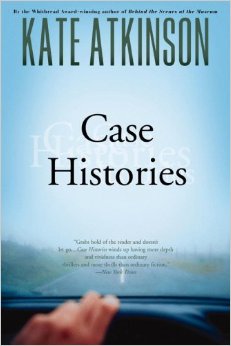 Another detective fiction novel – and another still to review, albeit with a paranormal twist – and this shares many similarities with The Cuckoo’s Calling but is done so much better.

Kate Atkinson – whose more explicitly literary offering of Life After Life was divine and possibly one of the best books I have ever read – is equally as controlled here, albeit set within the detective genre. Like Robert Galbraith’s Cormoran Strike, Atkinson’s detective is powerful and imposing and very masculine; he has also lost his wife just as Strike has been dumped by his girlfriend. Atkinson’s Jackson Brodie had suffered a trauma in his childhood as had Cormoran Strike.

The difference is that his narrative voice works and it fits him beautifully.

Also like Robert Galbraith, Atkinson bounces us around different narrative points of view but she controls and manages those changes. And they work to complement each other.

And Atkinson’s ability to delve into the characters’ minds is wonderful. Whilst there is a strong narrative drive through the chapters, each chapter meanders and jumps between past and present, between action and meditation, in a stream-of-consciousness which feels fully realistic and credible. It is so easy to get lost in the flow of her prose.

Case Histories revolves around a number of cold cases as the TV shows suggest we should be calling them. We have the unsolved disappearance of Olivia Land from 1970, prompted by her two remaining sisters – Julia and Amelia – finding Olivia’s cherished toy in their father’s office drawer after his death. The soft toy that had been with Olivia when she had died. From 1994, we have the unsolved murder of Laura Wyre, the daughter of a solicitor who had been attacked with a knife whilst in her father’s office, a loss from which Theo, her father, can not recover. Finally from 1979, we are presented with the apparently open-and-shut case of Michelle who, suffering from post-natal depression, seems to have buried an axe into her husband’s skull. Michelle’s daughter had been taken on by her grandparents and has run away and lost contact. Michelle’s sister asks for Jackson’s help finding her niece.

And, perhaps most significantly, there is a missing black cat!

It’s not a perfect book. Caroline’s story in particular didn’t strike me as terribly credible, knowing how stringent the checks can in an the educational world. The subplot of the attempts to kill Jackson himself was also a little forced perhaps. At times, the characters’ meditations just verge into feeling a tad contrived.

But what I did like was that the various plots were all fully resolved by the reader, but not necessarily by Jackson Brodie. There were revelations and uncoverings, cases abandoned and rejected, coincidences and resolutions.

Unlike Robert Galbraith, I am willing to pick up other Jackson Brodie books in the future!