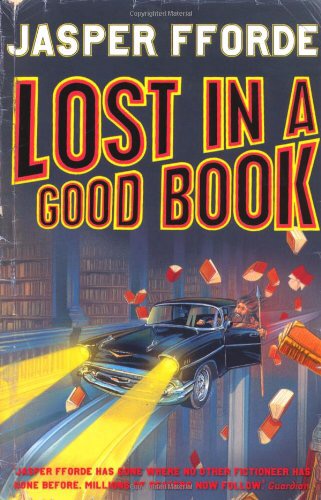 The second Thursday Next book picks up immediately after the end of The Eyre Affair and is a fun and joyful thing! A bit of lovely fluff: light, quick and just fun.

It does perhaps suffer from its role in the series: The Eyre Affair was pretty self-contained; it has spawned a series of – I don’t know how many – books. This book feels like a bridge between a stand-alone and the series. It expands the basic concept of entering into and exiting a book but, whereas the first book required a device to do so, it has become an innate ability by this one.  Yes, there were moments in the first which prepared you for this, but it’s a huge extension of the scope of the narrative.

The plot takes a little while to get going and feels almost secondary to the concept. A copy of the lost Shakespeare play is discovered; the villainous mega-corporation continue to be, well, villainous; a series of increasingly bizarre coincidences nearly kill Thursday. But don’t. And, almost as an afterthought, the world’s coming to an end. No one seems terribly concerned about that: it just hangs there in the plot. Mentioned occasionally.

Losses accrue, and they are quite heartfelt, to be honest. But there’s a sneaky suspicion that it’s all rather reversible. In a universe where dodos and Neanderthals and mammoths have been recreated, and extinctions reversed, an individual death seems less weighty than it should somehow.

Anyway, the heart of the book is The Library: a metaphysical collection of all the books that are, were, will be or might have been written are. And the interchange, I suppose, between fictional and real worlds. A transmetaphorical border control, if you like. Those who can read themselves into books can access the library and vice versa. And from the library, you or your fictional friend could pop into any written world. Imagine holiday img in Hamlet‘s Elsinore or sharing a pot of tea with Sherlock Holmes, Magwitch or Mina Harker.

Or being partnered with the somewhat cantankerous and redoubtable Miss Havisham to police the fictional worlds.

Is this a metaphysical exploration of the boundaries of the real and fictional worlds, exploring the impact of both on the other and the vexing question of identity? No. Not at all. It’s fun and quirky and – as a reader – somewhat self-indulgent but… to be honest… what’s wrong with that?