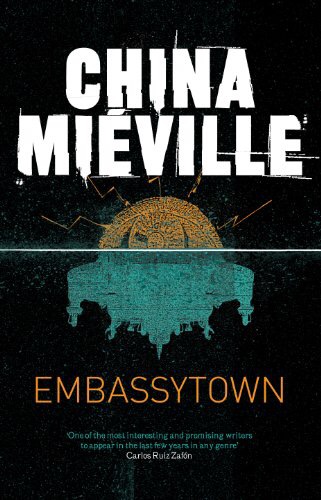 Hmmm… where to start with this one?

It’s a book on which I am still ruminating and which is still rattling away inside my brain after a couple of days. Nagging at me. Gnawing at my consciousness. And Miéville’s writing does that: it dwells and lingers and questions and challenges you. That is why Miéville is one of my favourite authors.

Embassytown is a novel about language – with or without a capital L – and imagination, identity, and thought. And, as always with Miéville, a city. A divided city.

This novel is Miéville’s entry into science fiction so the city is located in a far distant planet. The planet is home to the Ariekei, a particularly alien and enigmatic race known as Hosts to the colonists in the human town embedded in the Ariekene City. The divide here – unlike the sublime The City And The City – is very physical: the Ariekene atmosphere is unbreathable to humans and they are limited to artificially produced atmosphere called Aeoli. Our first introduction to the city follows the attempts of our protagonist, Avice Benner Cho, to penetrate

what was not quite a hard border but was still remarkably abrupt, a gaseous transition, breezes sculpted with nanotechnology particle-machines and consummate atmosphere artistry – to write Avice on the white wood. Once on a whim of bravado I patted the nest’s flesh anchor where it interwove with the slats. It felt as tight as a gourd.

The Hosts aren’t described in detail but remain enigmatic and hard to picture: their motion is crablike, and sometimes insectile; they walk precisely but on hooves; they have both fanwings and giftwings; they see through multiple eye-corals. And, critically, two mouths which speak simultaneously. There is something H. R. Giger about the organic insectile Hosts and their organic “biorigged” City.

is organised noise, like all of our are, but for them each word is a funnel. Where to us each word means something, to the Hosts, each is an opening. A door, through which the thought of that referent, the thought itself that reached for that word, can be seen…. Hosts’ minds were inextricable from their doubled tongue.

The words are the thoughts which they refer to. The signifier is the signified, in Saussarean terminology. As a result, computer generated voices could replicate the words but not the thought and therefore could not be understood as words. The solution? To use twins and, eventually create clones embedded with augmentations to create the impression of a single mind speaking through two mouths who act as Ambassadors between the humans and the Ariekei. Their names with their artificially capitalised second syllable reflect the strange artificial construct that the two people are a single mind: CalVin, MagDa, EzRa, YlSib, BrenDan.

Another complication of the Ariekeis’ Language is their inability to lie: because the thought is the word, the word can only be true. Metaphors are – literally – unthinkable. Even similes can only exist if the actual comparison has occurred and, to that effect, people are co-opted into acting out similes to become enLanguaged. And one such enLanguaged is our heroine Avice Benner Cho. I’m sure that such a language-steeped book has not chosen the ABC of our protagonist’s name coincidentally!

So, does the book work? Yes. Oh gosh yes. In the main.

The City and Embassytown are wonderfully evoked albeit perhaps less rendered than New Crobuzon, Armada or Kraken‘s London. There are fewer textures to the city and fewer dimensions, perhaps simply because Embassytown is a smaller and less diverse culture as a colonial outpost than these other older cities.

Miéville also delights in the opportunity Science Fiction gives to explore his own language with reasonable and credible etymologies and he often throws the reader in without glossing. His characters speak Anglo-Ubiq, a ubiquitous English; humans are described as Terre, derived from our Terran origin; non-human species are known as exots or exoterres from outside the Terran system; computers are Turingware; holographic three-dimensional messages are known as trid, the etymology of which may be clearer if a dash is added tri-d; and miabs deliver post and goods like messages in a bottle. I loved the way these neologisms jarred momentarily before becoming accepted just as part of the architecture of the world.

You do run into the occasional exposition in the novel: Avice’s husband, Scile, is a linguist and her friend Bren is a (part of an) Ambassador and both of them offer explanations of the Hosts’ Language. I had no problem with these occasional expositions: they were done well, timed effectively and weren’t hugely obtrusive.

I was far less convinced by the (fortunately brief) space travel section. The Immer – a strange alternate subspace in which distances were altered – was intriguing but very much in the background. It was little more than an excuse to take Avice off-world in order to have her return and occupy that liminal space of the outsider-native. There is potential within the concept of the Immer – warped dimensionality, fluid distances, strange pseudo-animalistic creatures – the possibility of it being sentient itself…

Did I love this book? Yes. Yes I did. I’m still baffled by it. But that bafflement feels good. I don’t know whether the book’s ending is triumphal or defeatist or, like the Ariekene Language, both simultaneously. At an intellectual level I love that the novel explores language and linguistics so explicitly and dwells on the power of language to enable thinking. Can we imagine that which we cannot articulate? Can thought be circumscribed by words? The book also works as a cracking science fiction adventure: the new Ambassador heralds in a catastrophe, war rages, our lone hero uncovers conspiracies, secret societies and embarks on a dangerous quest.

The narrative drive is suborned to the intellectual and linguistic explorations more than occurs in the Bas-Lag trilogy and the characters are less colourful but it does still work at that level.

Perhaps not my favourite Miéville novel but a great stand-alone challenging read.

Before you finish reading just cast an eye over the following image, the gorgeous cover art for Miéville’s works. See how that duality underplays each image: divided, distinct, disparate and yet conjoined, cohesive and collective. I was struggling a little to maintain the somewhat arbitrary alliteration there! Just gorgeous sensual covers. 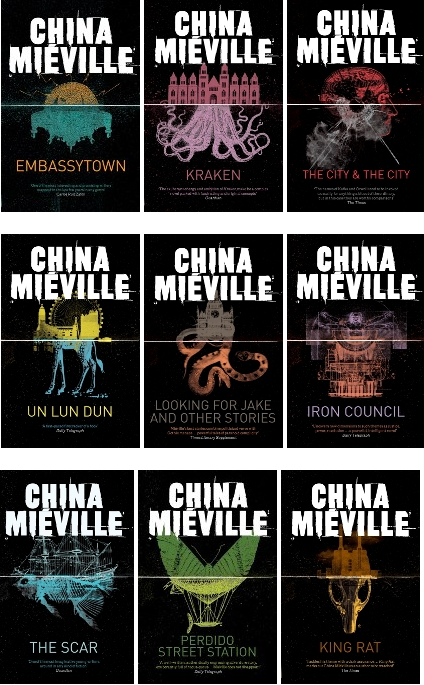