Being just a man, lacking in x-chromosomes, I’m sure I’m missing much of her political feminist subtlety but as a writer she blows me away! The balance she holds between the real, the fantastical and the macabre is fantastic.

Take this first eponymous tale in the collection: a re-imagined and post-feminist retelling of Bluebeard. The original tale is broadly retained: an innocent wife marries a sinister bestial man; she is left alone in his castle with a bunch of keys with the invitation to use any of them as she wished save for one; the forbidden key is – inevitably – used and the husband returns unexpectedly.

and the movement from “girlhood” to womanhood as the narrator

“ceased to be her child in becoming his wife.”

. And the husband – the marquis – is gloriously bestially described too! His beard is no longer blue but still as full and luxurious a beard as the most yokel of Devonian farmers: a “mane” which tickles and bristles on the “leonine shape of his head”. In many ways, Carter elides the image if Bluebeard with that of Beauty and the Beast.

This is clearly a tale of a coming-of-age: the discovery of the wife’s capacity for sensuality corresponds with her discovery of the bloody chamber in which the Marquis’ past wives are disposed of which itself is emblematic of the start of menstruation.

What appeals to me most in Carter’s writing is the sensuousness of her prose: the Marquis is masked by

and the wife’s nightdress

“slipped over my young girl’s pointed breasts and shoulders, supple as a garment of heavy water and now teasingly caressed me, egregious, insinuating, nudging between my thighs”

and the Marquis’ “fairy castle” with the

“faery solitude of the place; with its turrets of misty blue, its courtyard, its spiked gate, his castle that lay on the very bosom of the sea with seabirds mewing in its attics, the casements opening on to the ocean, cut off by tide from land for half a day … that castle, at home neither on the land nor on the water, a mysterious, amphibious place”

This is some of the most sensuous and sensual language that I have ever come across!

The biggest alteration made to the original story is the replacement of the wife’s brothers coming to rescue her from the Marquis with a wonderful depiction of her mother performing the same role. The “eagle-featured” mother is practically the personification of the word redoubtable: she had

“gladly, scandalously, defiantly beggared herself for love” in loving a soldier who died; and had “outfaced a junkful of Chibese pirates; nursed a village through a visitation of the plague; and shot a man-eating tiger.”

It is utterly reasonable that she should be the one to come charging across the causeway to her daughter’s rescue, a “wild thing” with

“her hat seized by the winds and blown out to sea so that her hair was her white name, her black lisle legs exposed to the thigh, her skirts tucked round her waist”

as the family of women bond against the predatory male “beast”.

As a man, my gender’s representation is a tad skewed: I can chose between a somewhat romanticised and definitely absent soldier-father; a monstrous and bestial husband; or a good-natured and blind piano tuner.

Not the most inspiring choice!

But with Carter, you kind of know what you’re getting as a man! 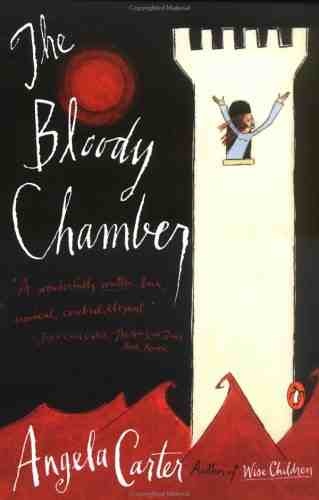