After reading a couple of extremely well-written, moving but rather serious books, picking up The Bloody Red Baron was intended to be a welcome piece of light relief: a bit of fun vampiric horror.

Kim Newman takes up the reigns of his alternate history some thirty years after the events in the previous Anno Dracula. Having fled from England in the conclusion of that book – as a result of Charles Beauregard’s effective device of giving the enslaved Queen Victoria the knife with which to kill herself and alienate Dracula from his claim on her throne – Dracula has ingratiated himself as Graf Dracula in Germany and taken over the persecution of World War One.

One of the pleasures of the book was putting together the pieces between the previous book and the current one with Beauregard as the rock around which both novels revolve. In this novel, as he staunchly refuses offers to be turned he appears to be moulding one Edwin Winthrope as a successor.

One regrettable loss was that Genevieve Dieudonne did not make any re-appearance here having been parcelled off to California; her role taken up by Kate Reed who had been somewhat underused in Anno Dracula. Although not as underused as in the original Dracula: Stoker managed to write her out compeltely! Reed – whilst still a vampire – is a new-born one and therefore fails to bring the mystique, majesty and mystery of Dieudonne who can state to Dracula the Prince Consort himself that “Impaler, I have no equal”.

Another pleasure is recognising the references and intertextuality that abound in Newman’s fiction: vampires from book and film stalk his pages from Count Orlok to Lord Ruthven to Caleb Croft (and fortunately no Cullens); but being further from the 1890s, for me, the references were less well-loved, less tender, less Gothic and more historical: Biggles, Mata Hari, Ten Brincken and Doctor Moreau.

One character who I simply did not like and did not understand his role in the novel was Poe: ostensibly drafted in to compile the Red Baron’s biography he just seemed to float about as an observer neither affecting nor influencing anything. The character of the Baron was fascinating: cold, detatched, bound in layers of emotional armour which I was hoping Poe would be able to peel away… but it seemed that, just as something human was being unearthed in him, the novel ended. 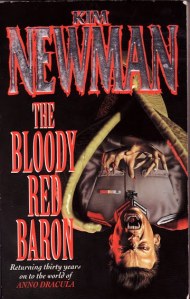 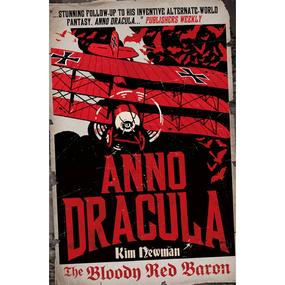 This novel pits the plucky Allied airmen and airvampires of Condor Squadron against the eponymous Red Baron Manfred von Richthofen and his demonic Jagdgeschwader Eins. And demonic is probably the right adjective here: Newman’s vampires are full-blooded nightmarish creatures, not the sparkly effete fairies of our post-Twilight world!

Whilst most vampires in the novel are broadly human in shape and size, Newman delights in the shapeshifting ability that the Dracula bloodline has and grows his JG1 into enormous bat-winged creatures the size of aircraft with guns strapped onto their flesh. As Newman put it:

a prehistoric monster with twentieth-century guns.

And these are not the most mostrous vampires: Isolde is a vampire mentioned briefly who as a performer in Paris presents a remarkably unattractive striptease, slicing through a leotard with a knife and then continuing to slice through her own flesh and to flail herself for her audience night after night. Newman delights in the description of her

exposed muscles [which] bunched and smoothed…bones visible in wet meat… arteries [which] stood out, transparent tubes filled with rushing blood

She becomes a recurrent image in the novel, memories of her returning to haunt Winthrope throughout and can be seen as a metaphor perhaps for the war itself. And the book is very strongly anti-war in its message: whilst there are individual acts of bravery and even heroism on both sides, the war across Europe created monsters of all involved. At its most literal level. In fact, as rather civilised and sympathetic vampires abound in the novel, the greatest difficulty Newman faced in the book may have been how to make the vampire more monstrous to his readers.

But it is not just the vampires who are the monsters here. Another very briefly seen vampire is an American one who – nameless – is seen disintegrating into mist in order to infiltrate a tank and, less than a page later is hit by a flame thrower and

centuries of unchronicled life were extinguished in an uncaring instant, blasted to sparkling shreds by brute modernity.

What this novel lacked was the overview that Anno Dracula had: Dracula there was present, ominous and contagious; in this sequel, he was distant and almost absent, his activities reported but not seen. There was no final standoff. No climax.

All in all, a good well-written and surprisingly thoughtful romp through Newman’s alternative World War 1. Certainly worth a read – as is any book in which Private Charles Godfrey from Dad’s Army appears!