This book has been lurking on my to-read list for a while but has been eclipsed by work, work and work and applying for my own job again and other books and has just slid…

Then I lent it to a friend who devoured it in 24 hours and proceeded to try to talk to me about it – damn her! – and I felt like a numpty having not read it yet whilst she gushed about how much she had cried.

So it was somewhat shamefacedly that I picked it back up again.

And realised what an absolute gem I had nearly missed! 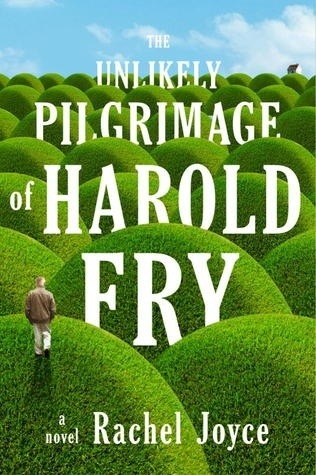 Harold Fry is a retiree living an outwardly calm and quiet life behind net curtains in Kingsbridge in Devon. He and his wife Maureen rarely speak, sleep separately and circle each other like different planets orbiting the same star. They remind me sharply of my own grandparents in their excessively cleaned home. My grandmother used to polish the apples. With polish.

One day, a letter arrives from an ex-colleague of Harold’s, Queenie Hennessy. She is dying of cancer. Harold pens a reply, pops to the nearest postbox, and then decides to deliver it by hand. To her nursing home. In Berwick-upon-Tweed.

Along the way, Harold encounters a variety of people all bearing their own stories and goodness; and Harold recalls, rediscovers and reconciles himself with the tragedy in his own past.

It is a truly beautiful book! The deep humanity within it is hugely touching. As is the quiet dignity of Harold and the aching struggle that he and Maureen have to communicate.

There was a personal interest in the book: having moved from the Midlands to the North East to the South West, I have literally travelled Harold’s road. The places – the towns – he visits however are briefly mentioned: Exeter, Taunton, Bath, Ashby de la Zouch, Darlington are little more than names and sketchy details. There is, however, a deeper love of England and nature beyond any passing urban description.

This book revolves deeply around the love and pain of family: the pain of a child feeling unwanted by his parents; of a father being unable to connect with his son; of a husband and wife estranged within the same home; of how the humdrum routine of life can dull the passions and joys and racing heart of earlier time.

Joyce’s language is full of the quiet dignity of her characters. By way of an example, Harold

wished the man would honour the meaning of words, instead of using them as ammunition.

There is a twist to the novel – which I won’t spoil for you – and a critical event twenty years earlier around which the novel revolves. I am pleased to say that it was a twist that I hadn’t anticipated or expected .. and that rarely happens these days!

Returning to my grandparents, my Grandad did run away from home once. On my Granny’s birthday. He didn’t get terribly far: he was wearing slippers and their drive was gravelled and hurt his feet. So he popped over the grass to the neighbours and knocked on their door. Just imagine how far he could have gone had their drive been tarmacked!

4 thoughts on “The Unlikely Pilgrimage of Harold Fry, Rachel Joyce”