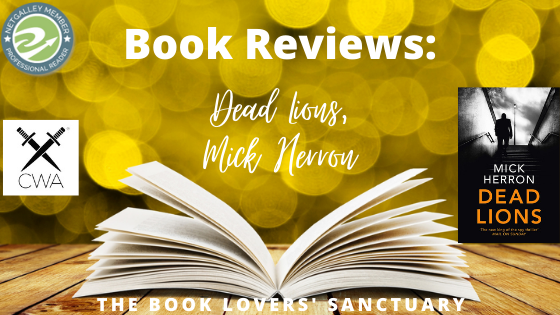 Dickie Bow is not an obvious target for assassination.

But once a spook, always a spook. And Dickie was a talented streetwalker back in the day, before he turned up dead on a bus. A shadow. Good at following people, bringing home their secrets.

Dickie was in Berlin with Jackson Lamb. Now Lamb’s got his phone, and on it the last secret Dickie ever told, and reason to believe an old-time Moscow-style op is being run in the Service’s back-yard.

In the Intelligence Service purgatory that is Slough House, Jackson Lamb’s crew of back-office no-hopers is about to go live . . .

Amidst all the ARCs and Booker nominees – and especially as I was stuck in a car for hours as we drove down to see my parents which is not my favourite place to read – a fun and entertaining novel was called for and Herron’s series, to which I am very late in the day, fitted the bill perfectly.

Mind you, I am not the only one who took their time coming across this series: Dead Lions wasn’t able to find a UK publisher for years and sank without a trace initially according to The Guardian, and Waterstones made Slow Horses their thriller of the month seven years after it first publication. They have a charming interview with Herron here.

Charming, however, is not the word that comes to mind when considering the dysfunctional failures that make up the spooks in Slough House who return to the pages of this novel after surviving the first one. Catherine Standish, Louisa Guy and Min Harper, Frederick Ho and River Cartright all return to the disgrace and tedium of being a slow horse – and their ranks are swelled by the new recruits of Marcus Longridge and Shirley Dander. Jackson Lamb presides over them as an unlikeable, repellent, corpulent and flatulent toad – and he has not improved since the first novel. If anything Lamb is more horrific here. There is one moment that nearly made me stop reading the book and give up: he doesn’t just drink in front of the recovering alcoholic Catherine; he doesn’t just offer her a drink; he pours and places a drink in front of her!

The plot here did stretch credibility a little but was, I felt, a little more coherent than the first one: a old retired spy – the incongruously named Dickie Bow – was found dead on a replacement bus service, a death which is dismissed by all except Lamb as natural. Investigations reveal a mobile phone shoved down the side of the bus seat with the word “cicadas” in an unsent draft message, and an errant hat. From this, Lamb spirals into recollections of ancient Cold War sleeper agents, the phantom Soviet figure of Alexander Popov, and conspiracy.

Alongside this, Arkady Pashkin, a Russian oligarch, has been invited to talks by the slimy James “Spider” Webb in the Needle and he has seconded Harper and Guy to babysit him – a term that seems to mean both protect him and keep tabs on him – for those talks. It did not come as a huge surprise that these two plots were connected by the end of the novel, even if it felt just a little forced.

But these are character driven novels and Herron himself admits that

And the characters are engaging (even Lamb) and likeable (except Lamb) despite their failings and weaknesses. One of the things I liked was the minutiae and inter-personal squabbles of the office spaces. Lamb who might be “scavenging his underlings’ food” when not dozing in his office, or Shirley pressing her ear to Ho’s door to find out what was going on, or Ho’s territorial claims:

“Roddy,” she said, and placed a can of Red Bull on his desk.

Nodding suspiciously, Ho moved it a few inches to the left. Everything’s got its place.

A lot of this novel – more I’d say than Slow Horses – took place out of Slough House itself.

River Cartwright who took centre stage in Slow Horses drops out of the limelight in this one, and no one really fills that centre stage position. Louisa Guy, perhaps, has most focus but this novel felt much more like a genuine ensemble cast – and benefited from that, too. I have to say, that of the new recruits – both of whom seemed to be scarily competent to be slow horses – I did like Marcus.

Nor does Herron like to protect his slow horses from the real dangers that they face. Let’s be blunt. People die. Characters who you will have liked will not make it to the end of the novel. This does invest the plot with a certain tension and with the exception of Lamb I am not sure I would put money on anyone surviving the next five books. But at least we know that, if any of them end up dead, Lamb’s comments to River will probably hold true for all of them and, I suppose, that beneath the flatulence and racism and antagonism, this probably counts for loyalty or at least courtesy:

You’re a fuck up, but you’re still in the game. So if you turn up dead one day, and I’m not busy, I’ll probably ask around. Check for suspicious circumstances.

“He’s going to the Cotswolds, Standish. Not Helmand Province.”

“There’s something Charles Partner used to say about ops. The friendlier the territory, the scarier the natives.”

What Could Be Different