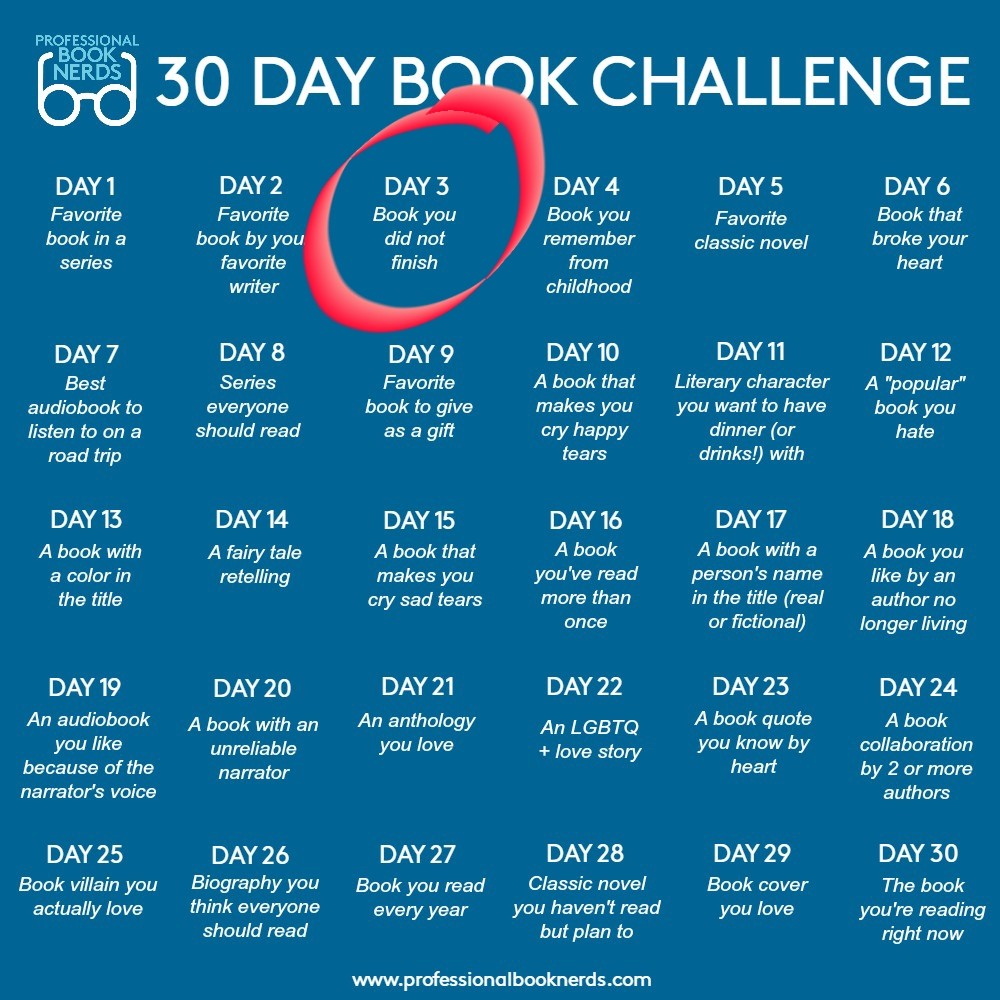 Today’s challenge is a little easier because there is less competition!

A book you did not finish

I generally finish my books! Not all. Not always. More often because of time pressures than choice. And I am taking this challenge to be a book that I chose not to finish.

Books still to be started would be a much longer list!

One book I didn’t complete at University – which led to a rather awkward conversation with my tutor after submitting a patently inadequate essay – was Robinson Crusoe. Oops. And the irony is that I now grumble at other people’s essays and question ‘Did you read the whole text?’ At least I recognise the irony! Anyway, I have now – in fact rapidly after that tutorial – rectified that lacuna!

Only two really come to mind.

One was Grave Beginnings, Book One of The Grave Report, by R. R. Virdi and it was just very derivative of the Dresden Files – even down to the name. On top of that, the copy I had was littered with spelling and grammatical mistakes. It was one where I just thought There are so many other, better books out there, why am I reading this one? Glancing over at Goodreads, it currently has a 4.5 Star rating so maybe I’m missing something. That said, I’m not blown away by Jim Butcher’s Dresden Files either.

The Goodreads synopsis of it is

“I believe R.R. Virdi belongs with other Urban Fantasy greats like Jim Butcher. The Grave Report is sure to go far and only pick up more fans with each successful novel. I can’t wait to see where R.R. Virdi will take us next.” – A Drop Of Ink Reviews

“Fast paced, humorous, with action and drama on every page and paragraph, this paranormal thriller is reminiscent of one of my all-time favorite authors. This is like Jim Butcher’s The Dresden Files but with a flavor all its own. RR Virdi is fame-bound with this series. If you like Jim Butcher, you’ll enjoy this one. Highly Recommend.” – CD Coffelt Author of The Wilder Mage

Thirteen…
As far as numbers go, it isn’t a great one. Hell, it’s not even a good one and Vincent Graves is going to find out just how unlucky of a number it can be.
Because someone, or something, is killing people in the Empire state, and whatever it is, it gives people everything they ever desired and more. And it’s the more that’s the problem!
Well…it’s one of the problems.
Vincent’s investigation also seems to have drawn the attention of a relentless FBI agent and then there’s the little bit where he has only thirteen hours to solve the case, or he dies.
Talk about your literal deadlines…
…No pressure.
By the end of this case Vincent will come to understand the meaning of an age old proverb: Be careful what you wish for – because you just might get it!

The other book I didn’t – or couldn’t finish was I, Lucifer by Glen Duncan. It is not dissimilar to Grave Beginnings in some respects: elements of fantasy and a little derivative. In this one, the Devil narrates his time in the body of a human, given a chance at redemption. I have no theological problem with reading Lucifer’s point of view – I’d not have read Neil Gaiman’s Sandman series with Lucifer in it, nor watched the TV adaptation with the gorgeous Tom Ellis

nor read Bulgarkov’s The Master and  Margarita, not Gaiman and Pratchett’s Good Omens, if I did – and there were re-visions of familiar biblical stories which were interesting enough. I found I did have some ethical issues with the drinking, drugs and sex which is unusual for me – although I found The Wolf of Wall Street similarly uncomfortable – but I was just bored to tears by it all.  Lucifer was self-obsessed – possibly not a surprise – and just really annoyingly boring! The sex and drugs became tedious rather than shocking.

Again, I just thought Why am I bothering? So I stopped bothering!

The Prince of Darkness has been given one last shot at redemption, provided he can live out a reasonably blameless life on earth. Highly sceptical, naturally, the Old Dealmaker negotiates a trial period – a summer holiday in a human body, with all the delights of the flesh.

The body, however, turns out to be that of Declan Gunn, a depressed writer living in Clerkenwell, interrupted in his bath mid-suicide. Ever the opportunist, and with his main scheme bubbling in the background, Luce takes the chance to tap out a few thoughts – to straighten the biblical record, to celebrate his favourite achievements, to let us know just what it’s like being him.

Neither living nor explaining turns out to be as easy as it looks. Beset by distractions, miscalculations and all the natural shocks that flesh is heir to, the Father of Lies slowly begins to learn what it’s like being us.

I think it was the disappointment that a promising idea had become so dull was what tipped this one into my DNF pile.