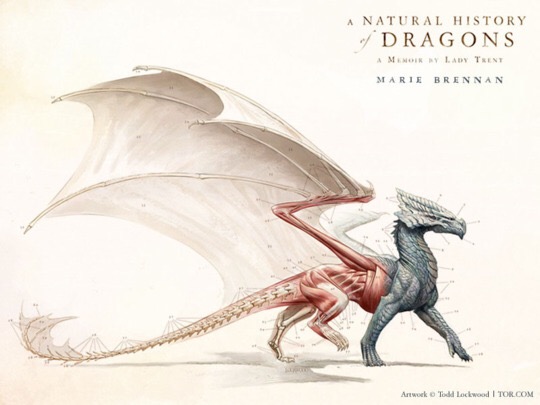 This was a pleasant enough way to round of my half term: decently written in the engaging and practical voice of Lady Trent, this book conjures up a Regency style world with echoes of Austen. With dragons.

The opening sections of the novel are the most Austenesque – if that’s even a word. Isabella Hendemore, the only daughter in a brood of boys, is indulged by her often absent gentleman father in an interest or passion in dragons who appear to be common enough to encroach into her father’s lands occasionally. They are treated by most people as any other predator, albeit a particularly dangerous predator, to be hunted and driven away from farms.

After a few minor dragon-based adventures, Isabella is introduced to Society where she meets Jacob Camherst. Their courtship is sped over – presumably due to an absence of dragons – and I’d have liked to have seen more of it. Brennan’s writing was actually quite effective in describing the tension and comedy between genuine affection and the conventions in which Isabella are forced to express it. I mean, don’t get me wrong, it’s not Austen; it’s not social satire. But it was sweet and affecting. Especially as the narrative voice of Lady Trent is narrating the tale with the benefit of hindsight, status and a certain reputation for boldness.

Following the wedding, Brennan has Isabella Camherst meet Lord Hilford, a peer of the realm with a naturalist’s interest in dragons. An expedition is planned to the village of Drustanev in Vystrana, a thinly veiled Russia. Isabella manoeuvres herself to be included in it. And from there, the heart of the novel begins as Brennan moves the memoir into the territory of a travelogue and then a mystery thriller. With dragons.

The voice of Isabella, Lady Trent, was very well done. Self-deprecating, self-aware and honest. She – and in very real ways we’ve not seen her as neither Isabella Hendemore nor Isabella Camherst had yet become Isabella, Lady Trent, as she herself pointed out – was irascible and warm and engaging. A bit like an eccentric great-aunt. And the novel did indeed sound like what it claimed to be, a memoir, with occasional asides to the reader, references back to novels, travelogues and reference books within the world of the novel.

The dragons’ presence was almost incidental: they were an integral feature of the landscape Brennan created and a key plot device but the story was really about the people. Some suspicious and fearful, some greedy, some venal, most generally decent, none exactly evil. It was quite refreshing for a fantasy novel not to have a dark lord figure brooding over the world pretending to be Sauron – and no doubt one whose name ends in -ex or -ix or some other suitably sinister suffix. Yes, Christopher Paolini, I’m referring to your King Galbatorix here! I’m sorry, but, well, the dragons make it an obvious comparison.

So, all in all, I enjoyed this. It was pleasant and took me to a credible other world with some interesting characters.

And there were dragons.

And, doing the Reading Challenge which requires a trilogy, the remaining two books in the series (see here for covers, which are also very impressive) won’t be a bad way to spend the Summer.