I’ve been meaning to get round to reading Joe Abercrombie’s The First Law trilogy for a while but haven’t managed to find the time recently. Work. Children. Babies. Goatee growing. You know: the things that take up your time.

But with the summer holidays coinciding with a new book, Half A King, I thought I’d start there. 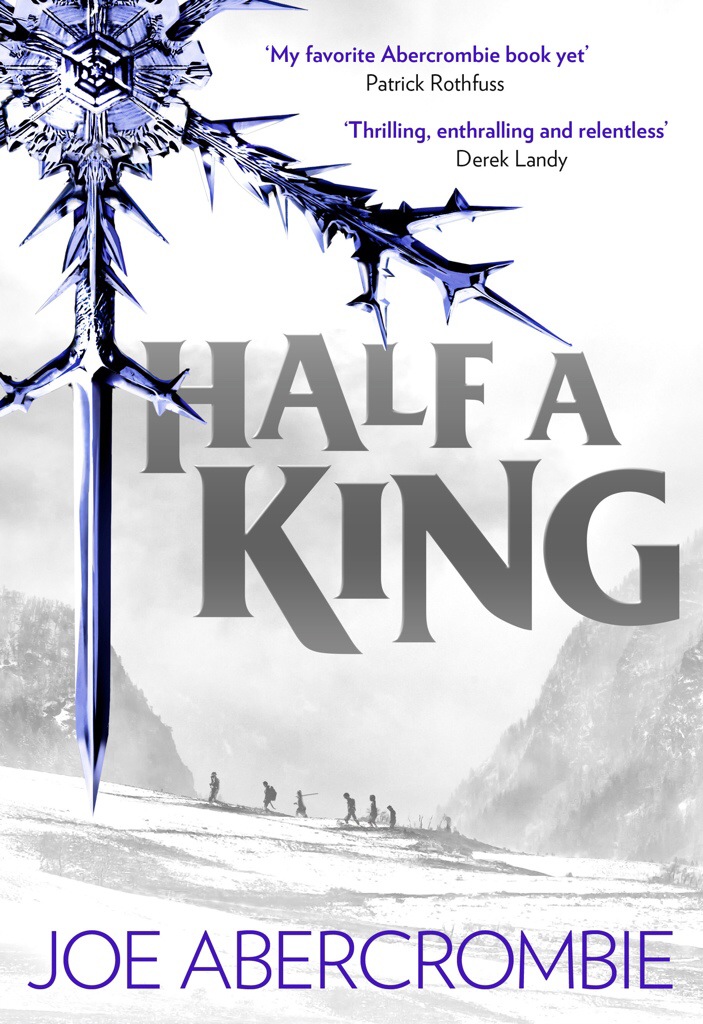 Half A King is a fantasy novel aimed at the Young Adult audience which is a difficult one to succeed with: the pace required to satisfy a modern teen male audience brought up on video games, instant gratification and the internet can be inimical to the development and depth required to create an authentic High Fantasy world.

Does this one succeed?

Not entirely, in my opinion.

Gettland is one of the kingdoms around The Shattered Sea, the world of the novel. Whilst fictional, The Shattered Sea has echoes of Norse and Viking culture and language which lends the novel both a familiarity and alienness. It’s not as ubiquitous in our culture as the Greek or Roman mythologies of the Low Fantasy Percy Jackson series; but stories of burning longboats and raiding parties are still part of most school children’s education.

The novel focuses on Yarvi, second son to the King who unexpectedly ascends the throne in the opening chapter, following the deaths of his father and older brother. The novel proceeds to follow his slightly tenuous grip on the throne in a series of adventures and set backs. At its heart, it is a coming of age book as Yarvi is forced to follow a journey into adulthood. As is typical of this genre, our unlikely hero collects unlikely allies and forged unexpected friendships to aid him on his journey.

Abercrombie maintains the pace of the novel well: Yarvi’s various exploits are episodic and at times we seemed to lurch from one incident to another. Only once or twice does Abercrombie slow things down enough to try to develop characters and their relationships. For me, it marred the book a little.

Nor was I terribly keen on the main character, Yarvi. He started engagingly enough: the youngest son, rejected because of a malformed hand, reticent and shy, forced into a role he did not desire and for which he was ill-suited. So far, so good. But he becomes an altogether less engaging character as the novel progresses and far more blood thirsty and distinctly lacking in empathy. The attempts to humanise him – through his friendships with Rulf, Jaud and Ankram and the hint of romance with the somewhat exotic navigator Sumael – did not convince me. It’s hard to give specifics without giving spoilers away but there is one point in particular when I was quite shocked by his lack of empathy.

As someone who dislikes violence, I was also mildly concerned that violence – or more precisely “steel” -was often viewed as the “answer” to almost every problem. In fact, on several occasions, we were told exactly that. I’d have liked Yarvi, having been trained for the Ministry, a scholarly and advisory role, to have been more reliant on his wits and tongue and less reliant on befriending people to fight for him.

One character I did like a lot, though, despite his fairly minor role, was Grom-gil-Gorm, a neighbouring King. His presence was quite magnetic, especially as we generally viewed him from the point-of-view of Yarvi kneeling at his feet.

There is something very much of the Game Of Thrones atmosphere in this novel: Laithlin, Yarvi’s mother, is reminiscent of Cersei Lannister; the historical-fantasy world; the inter-familial violence; the competing religions; the ambiguous characters trying to balance honour and ambition. Personally, I found Phillip Reeve’s Here Lies Arthur more effective on many levels and navigating the same ocean with far more satisfying results. For my review of that book, see here.

Another blog review on this book is here.