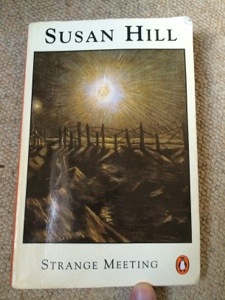 I do not generally choose war books. In all honesty, had I come across this book with this cover in a shop or library I would probably have skipped over it. I like Susan Hill; I dislike war. I am particularly hesitant about The Great War novels written recently: I’m uncomfortable with the glorification of war which can appear; and equally uncomfortable with the indelicate emphasis on the gore and violence; and no more comfortable with a romanticised vision of the war. And I worry that, with the centenary, we may get a lot more of it.

So, no, to sum up, this is not a book that I would have selected naturally.

Which goes to show how our preconceptions can mislead us: this is a powerfully moving book about friendship and love within war. It is not about war.

We get a snapshot of John Hilliard’s life between his recuperation from one leg injury until he returns to the front line and sustains another leg injury. The first injury is relatively minor and sends Hilliard home to recuperate; the second is significantly more serious and sends him back to England for the rest of the war. During this period, Hilliard is introduced to Lieutenant David Barton, a new and innocent officer in the army, and the friendship, the relationship – and, yes, the love – between these two is the heart of the novel.

Reviews on Goodreads – and, it appears from Hill’s afterword to the novel, many comments since the book’s publication – seem unduly obsessed with these men’s relationship as a homosexual one. It saddens me that some people think that that’s even worth considering! It wouldn’t change the depth of feeling those two men had for one another; it wouldn’t alter the beauty of their relationship; it wouldn’t vary the strength that each man drew from the other. I happily recognise it as a form of love – and the Greeks knew that the emotions we call love encompass a range of varied and different forms. And – seriously – if we accept that theirs is a loving friendship or a loving relationship, all this fuss is about what physical and sexual acts may have occurred between two men who – and here’s the important bit – never existed!

So yes, these men love each other. They meet in unassuming but reasonably peaceful conditions in a rest camp away from the frontline. Truths are told which have been repressed before. Intimacies forged. The coldness of Hilliard’s family is replaced by the warmth of Barton’s.

Love is returned to over and over in the novel: Hilliard’s love for his sister is warmly and tenderly described as a memory and her transformation into a coldly formal wife is as heart breaking in its way as his love for Barton is heart warming.

But ultimately and inevitably the war re-asserts itself: Barton is exposed to increasing levels of death and destruction; his innocence and good nature, which had thawed Hilliard’s weariness, is tested and tarred by the increasing violence he witnesses as they are moved closer to the front line.

The story also explores the power of writing: Hilliard’s inclusion in the correspondence between Barton and his family and their sharing of books at the front helped to forge their intimacy to such an extent that, on his visit to Barton’s home, Hilliard had a beautiful sense of returning home which contrasted beautifully with the sense of exclusion and alienation Hill creates when he stays at his own parents’ house in the opening pages.

This is not, however, an easy book to read. The first few pages recounting Hilliard’s final day of recuperation follow a convoluted chronology as the past (occasionally distant and occasionally recent) intrude upon the present. Whilst this lends a lyrical dimension to the writing which I loved, it doesn’t aid reading – although the sense of Hilliard as being ripped out of time and adrift was absolutely effective.

The other issue which might put some readers off is the extent to which this novel relies on dialogue. The narrative descriptions are effective but relatively sparse (in marked contrast to Hill’s gothic novel The Woman In Black). Dialogue is – as I say to my students – really hard to make authentic and Hill succeeds in the vast majority of the novel but there are the occasional overly philosophical expository moments which aren’t out of keeping with the characters but felt perhaps a tad forced. It’s no surprise that the reason I did pick it up is because it’s on the AS English Language and Literature course in their spoken language unit!

In any event, this is a deeply moving and tragically painful book. As it acquired its name from the Wilfred Owen poem of the same name, here it is!

It seemed that out of the battle I escaped
Down some profound dull tunnel, long since scooped
Through granites which Titanic wars had groined.
Yet also there encumbered sleepers groaned,
Too fast in thought or death to be bestirred.
Then, as I probed them, one sprang up, and stared
With piteous recognition in fixed eyes,
Lifting distressful hands as if to bless.
And by his smile, I knew that sullen hall;
By his dead smile I knew we stood in Hell.
With a thousand fears that vision’s face was grained;
Yet no blood reached there from the upper ground,
And no guns thumped, or down the flues made moan.
“Strange friend,” I said, “Here is no cause to mourn.”
“None,” said the other, “Save the undone years,
The hopelessness. Whatever hope is yours,
Was my life also; I went hunting wild
After the wildest beauty in the world,
Which lies not calm in eyes, or braided hair,
But mocks the steady running of the hour,
And if it grieves, grieves richlier than here.
For by my glee might many men have laughed,
And of my weeping something has been left,
Which must die now. I mean the truth untold,
The pity of war, the pity war distilled.
Now men will go content with what we spoiled.
Or, discontent, boil bloody, and be spilled.
They will be swift with swiftness of the tigress,
None will break ranks, though nations trek from progress.
Courage was mine, and I had mystery;
Wisdom was mine, and I had mastery;
To miss the march of this retreating world
Into vain citadels that are not walled.
Then, when much blood had clogged their chariot-wheels
I would go up and wash them from sweet wells,
Even with truths that lie too deep for taint.
I would have poured my spirit without stint
But not through wounds; not on the cess of war.
Foreheads of men have bled where no wounds were.
I am the enemy you killed, my friend.
I knew you in this dark; for so you frowned
Yesterday through me as you jabbed and killed.
I parried; but my hands were loath and cold.
Let us sleep now. . . .”