I have been enjoying this series. They were nothing exciting, nothing terribly original.

But they were fun.

They were light hearted.

They were fast-paced and witty.

But niggles and worries are starting to mar my enjoyment of them now. The worse elements are coming to the fore and the books are becoming increasingly dark, violent and disturbing. 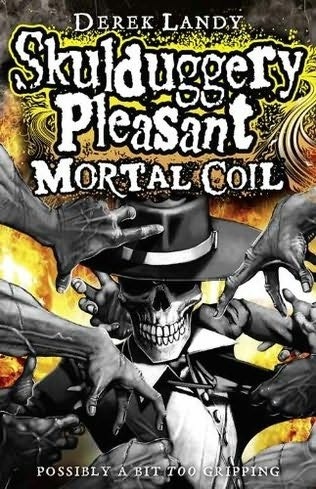 The plot focuses much more on Valkyrie Cain than the previous books: the threat doesn’t come from an escaped convict or a malicious gaggle of vengeful past characters; no one is attempting to return the Faceless Ones to power. Instead, the novel continues the quest to identify the new threat Darquesse and develops Valkyrie’s final realisation from Dark Days that her true name is Darquesse and that she is herself destined to kill her own family and destroy the world.

Two parallel plots develop: Valkyrie seeks to have her true name sealed in order to stop anyone from forcing her to become Darquesse by using the power of her name; and the Necromancers accidentally release two thousand ‘Remnants’ into Ireland. Remnants, which had been introduced the Dark Days are slivers of dark power capable of inhabiting human bodies and accessing their skills, powers and memories.

It is the first strand of these plots that I balked at: in order to seal net true name, Valkyrie had to enter a state of conscious death, had to watch and observe her own dissection, the removal of her heart and the etching of symbol magic into the flesh of her heart. And the dead / undead surgeon Nye then proceeds to imprison Valkyrie and continue to dissect her organ by organ. And she lies there and watches the procedure in a state of inertia.

There’s a lingering on it which hadn’t been there in the darker aspects of the earlier novels . Yes, to be sure, Tanith Low is regularly tortured (I think as revenge on the editors who thought it was too dark to kill her off in book one); Skulduggery is tortured. But these are brief moments, usually off stage, referred to but not seen. Here, Landy lingers and describes and we see the heart. And, whilst dissected, Valkyrie contrives to escape her bonds, standing up, organs removed, folding her sternum and chest back onto itself, chucking her own heart and removed organs into a carrier bag.

This is almost torture-porn.

I’m not the sort of chap who thinks children’s books should be sentimentalised and anodyne. I like gritty young adult books: I thought Between Shades of Gray, fir example, was wonderful in its honest unsentimental realistic horror of the war. Violence, loss, death are, in my opinion not inappropriate for young adult fiction, if there is a point to it.

But this, like Darren Shan’s Demonata series revelled in gore for its own sake and there was no other point. The gore did not make the situation tense; it did not add to the plot; it did not develop any character – although apparently Nye, the ‘doctor’ who performed the procedure will be brought back in future books.

In retrospect, perhaps it would be more accurate to say that I object to the pointlessness of Landy’s torture-fest.

welcome to my section of the moon!