Bring Up The Bodies, Hilary Mantel

Ooooo the adorable and lovely Mrs P has just returned from Exeter with my pre-ordered copy of Bring Up The Bodies. 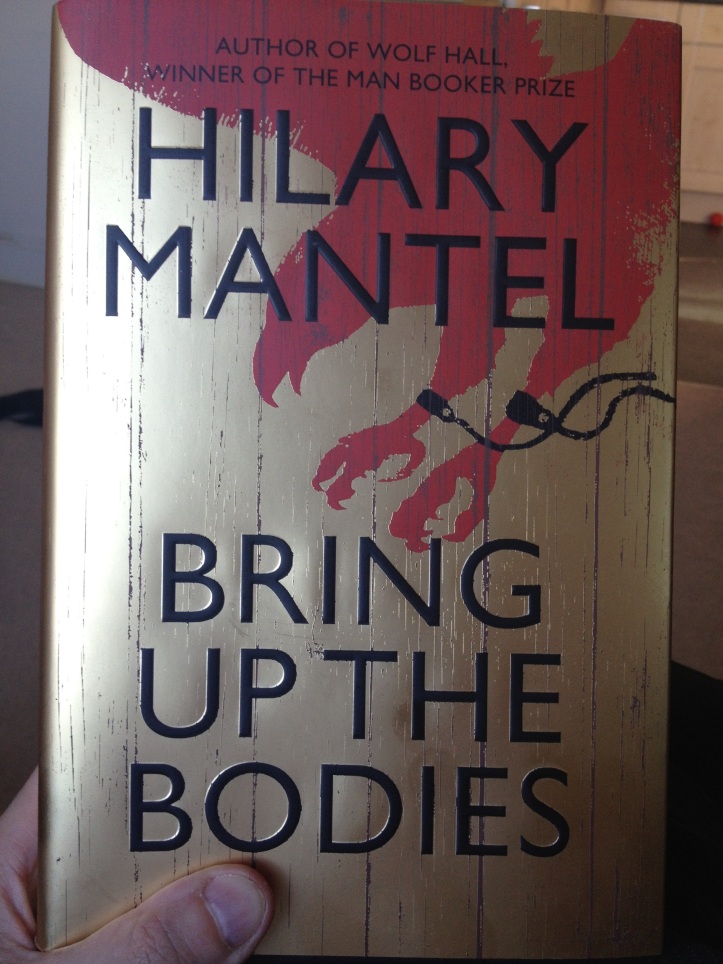 As a big chunky two inch thick book, released in the midst of a busy time at work, it may take a while to be able to give a full review so I thought I’d do a quick mini-review of the opening pages. A ‘taster’ if you like; or an amuse-bouche.

So Bones is a sequel to the sublime (and that’s coming from someone whose not a fan of historical fiction generally) Wolf Hall which ended with Thomas Cromwell moving into the role of Henry VIII’s chief minister, Wolsey has died, Thomas More executed, Anne Boleyn Queen.

The opening pages of Bodies picks up with Cromwell and Henry VIII (with assorted courtiers including the winning Rafe Sadler) hunting together. The first sentence is chillingly bizarre: “His children are falling from the skies”. Recalling the tender, terrible moments in Wolf Hall when Cromwell’s wife and children succumb to the plague, it is almost enough to bring a tear to the eye immediately.

Mantel in just these pages hurls us once again headlong into the Tudor world. The present tense (which usually grates with me but here I relish) thrusts us into the “gore-streaked … riot of dismemberment” that is Henry’s hunting season.

Knowing my GCSE history, as I tentatively, vaguely, tenuously do (reinforced by Phillipa Gregory’s Other Boleyn Girl), I don’t think it’s a spoiler to note that Boleyn is executed in due course. This opening gore soaked hunting scene anticipates the inevitable fall of Anne and reinforces the blood stained history of the period. This is no chivalric romance.

There is a wonderful, lyrical quality to Mantel’s language here. The hawks (named after Cromwell’s dead children and hence explaining that enigmatic first line) fly above and bear witness to a “flittering, flinching universe”; Henry’s summer consists to the “beating off and the whipping in of hounds”.

We don’t see much of Cromwell himself here: he seems almost eclipsed by Henry’s presence. As Mantel writes, Cromwell “will defer” to the King’s or the Seymours’ stories at supper so that his work can begin as night falls. What we do see of him, however, sets him out as distinct and different from the others. Unlike the King, unlike Rafe, Cromwell does not burn in the summer sun but remains “as white as God made him” with “the skin of a lily”. This suggests again perhaps a grave-marked quality to him, possibly almost a vampiric presence: communing with his dead daughters, deathly pale, working through the night.

Overall a great opening. Not as strong as Wolf Hall‘s which erupts before us with a scene depicting the young Cromwell being beaten half to death by his father Walter in a coruscating tour-de-force!

Poor Mrs P may have to put up with an engrossed husband this weekend…. But then I also know what else she bought … 😉