This was my first foray into the realm of audiobooks, thanks to a new phone and Audible.com so this review will be a review both of the experience of audiobooks as well as the book itself. I’ve always been hesitant about audiobooks due to three factors: the price of them seems disproportionate in comparison to paper and I am nothing if not a miser; and I was hesitant about hearing a book read in any voice other than my own – which I suppose suggests a certain megalomania on my part; and as a man of limited brain power I was worried that I may not be able to concentrate on them enough to drive at the same time and having hour long drives to and from work each day I was hoping to fill that time with them.

I have to say that I was pleasantly pleased with the experience. An offer from Audible.com made it affordable; and I found the book required enough concentration to stop me dwelling on the various catastrophes in my classes every day; but not enough to prevent me from driving safely. Or at least no less safely or competently than usual! It did take longer to listen to a book than read it: as a relatively fast reader, it was a little limiting to be restricted to another person’s speed. Also, some linguistic peculiarities that might be skimmed over in a written text can become niggling when read aloud.

Anyway onto the book!

Kallentoft caught my attention on A book shelf with the Swedish title Midvinterblod and the usual “The Next Steig Larsson” boast on the front. Despite a somewhat sceptical attitude, something about the blurb and description appealed.

Despite the Swedish setting, the story is in the familiar genre of the police procedural. Malin Fors is a police officer in the Linköping police force who is called the scene of a brutal murder in the opening chapters of the book. The narration is very strongly from Fors’ point of view with some notable exceptions. The most obvious and unusual exception was when the narration is taken over by the murder victim, Bengt Andersson. The first occasion it happened, I was intrigued by this fresh perspective, reminiscent of The Lovely Bones. Unfortunately I found it distracting as it became a regular feature of the book: it added little if anything to the narrative and I didn’t find it increased my empathy with him any more; it also was a voice that jarred with the impression I got of Andersson through the rest of the narrative. Andersson is overweight, socially, emotionally and physically impaired and cared for by Social Workers. The impression I received of him through the book was of someone who was isolated and less than capable. The image of him waiting outside the fence of a football stadium every weekend in order to catch abc return their stray balls (from which he got his nickname Ball Bengt) was genuinely moving and reminded me of my daughter who has Asperger’s Syndrome on the outside of a group wanting to join in but not knowing how. The voice in his narration however was knowing and articulate and I found that that jarred for me.

However, the character that carries this book and the series which I suspect will follow is Malin Fors. She is possibly one of the most rounded and credible police characters I have come across, certainly one of the most credible female police roles. She is a single mother with a thirteen year old daughter Tove, a lingering love for her ex-husband and a physical attraction to, occasional nights of lust with and a potential romance with a newspaper reporter Daniel. The relationship between Malin and Janne, her ex-husband, was I thought dealt with very effectively and delicately from the photograph of him beside her bed which she “usually tells herself is there to make Tove happy” to the silent nighttime phone call she makes to him. It a realistic, messy, lonely situation but not melodramatically tortured in the way that some detectives are.

Tove – as a relatively minor character – was also well drawn. Perhaps it reflects different attitudes between Scandinavian and British attitudes to parenting but I did feel that I wouldn’t let my thirteen year old daughter behave as she did! The seriousness of the relationship between Tove and her boyfriend Markus – it is implied that they were having or close to having sex – and the formal “meeting his parents” scene – may have been more credible had she been fifteen or sixteen.

It says a lot about the strength of Kallentoft’s writing that, thus far, I have only really mentioned his characters: the plot, whilst well plotted, intriguing and thoughtful, was the scenery which the characters brought to life.

Bengt’s body is found mutilated and hanging from an isolated oak tree in the forests around Linköping. Various lines of enquiry emerge: his death suggests a connection to Old Norse Æsir religions; local schoolboy bullies; and his family which, as the novel progresses, becomes ever more complex, interconnected and sinister. Without giving the plot away, I did anticipate about half way through who the murderer was and why they had murdered but that didn’t detract from the enjoyment of the book because it is as much character driven as plot driven. I was however a little disappointed that the killer was revealed by a rather artificial device: out of the blue, a psychiatrist phoned up and told them! After 6 years practising law as a barrister, that seemed more deus ex machina than policework which is generally far more pedestrian!

Kallentoft’s other strength for me is his description: the chill of the midwinter, the way the cold and trees of the forest muffled the noises and voices of Malin and her partner were hugely evocative. I loved the descriptions of the food as well, which was often dealt with in some detail, including odours.

One thing which did grate was Kallentoft’s dialogue: although the dialogue itself was convincing, it was almost invariably followed with “he says” and “she says”. Perhaps this was a limitation in the translator rather than the writer; perhaps it is more of an English stylistic expectation; perhaps it was more obvious because I listened to this as an audiobook rather than skimming it as a written text. As a teacher, however, who constantly advises his students to limit their use of “said” it really irked!

In short, then: this was a really impressive police procedural populated by convincing and compelling characters. Would I buy another Malin Fors novel? Definitely. 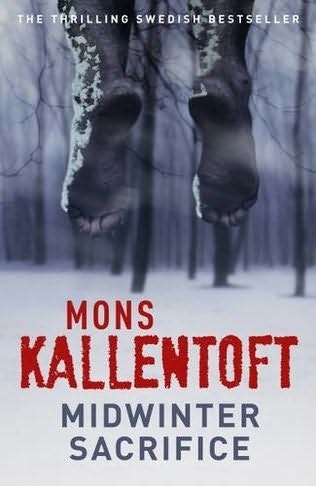