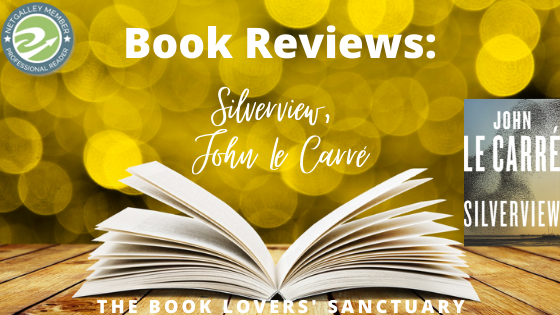 Julian Lawndsley has renounced his high-flying job in the City for a simpler life running a bookshop in a small English seaside town. But only a couple of months into his new career, Julian’s evening is disrupted by a visitor. Edward, a Polish émigré living in Silverview, the big house on the edge of town, seems to know a lot about Julian’s family and is rather too interested in the inner workings of his modest new enterprise.

When a letter turns up at the door of a spy chief in London warning him of a dangerous leak, the investigations lead him to this quiet town by the sea . . .

“Sometimes the whole of marriage was a cover story.”

It’s been a long time since I read any le Carré: he had sort of slipped off my radar, as had – to be honest – the whole espionage genre. I’m not sure what brought me back into the fold, brought me in from the cold, perhaps? Personally I am looking at Kate Atkinson’s Transcription as the first espionage book I really loved for a while, and then perhaps Mick Herron’s Slow Horses series that I have begun.

Anyway, back to the book which alternates broadly between Julian’s story and his growing friendship with the enigmatic Edward and his Homburg hat, and Stewart Proctor’s pursuit of a leak in British Intelligence.

Inevitably, that leak is found to be Edward and the net slowly closes in on him, as the narrative expounds on his history: married to the formidable agent Deborah Garton, now fighting a losing battle with cancer; a formidable and highly skilled agent in his own right, a “bloody good joe” who was over-worked and became disillusioned after a tragedy in Bosnia.

When we meet him, Edward is in the habit of befriending local business owners and shopkeepers in the East Anglian village in which he and Deborah live with their daughter Lily. Friendships which tend to lead to business opportunities, opportunities for Edward to create new email addresses and use others’ computers…. tradecraft, you see? Nudge nudge. Deborah has started to suspect him of leaking secrets and dispatches their daughter – who is somewhat unwilling, understandably, to get involved in this intensely murky domestic spat! – to London to alert Stewart Proctor, the Head of Domestic Security.

This is not a cat-and-mouse thriller as some reader might have hoped for – there is not the drama of Mick Herron, nor the tension that I recall from earlier le Carrés. It is more contemplative, more retrospective, more… tired. Not that the writing is tired, but that the institutions of the Secret Services are jaded and tired. Vision and belief are mistrusted.

The genesis of this book are documented well – written in 2016, not published for 5 years until after le Carré’s death, by his son. And it does feel to me incomplete in some ways. There was more about Proctor and his relationship with his wife – who may or may not be having an affair, or may actually be on an archaeology dig; Julian’s decision for leaving London; Edward and Deborah; Lily…