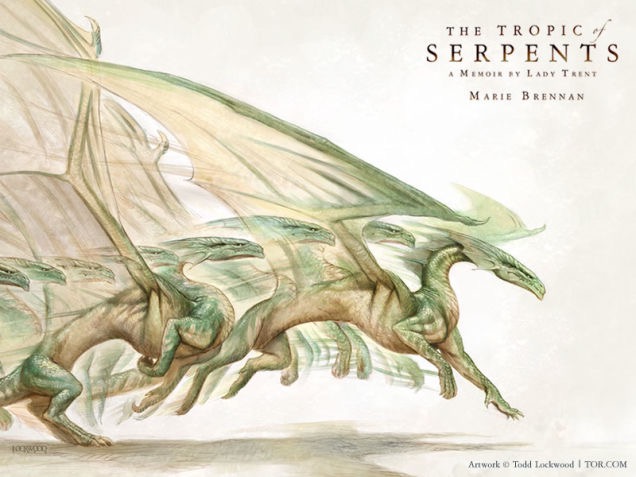 Again, a gorgeous cover here and a decent read.
This is the second in Marie Brennan’s Lady Trent trilogy and it continues the adventures of Mrs Isabella Camherst – still to meet Lord Trent or to be named a lady – from the first book, A Natural History Of Dragons. Much of what I praised in the first book re-appears here, but not all.

I have more hesitation this time round – although I’ll admit that that may be caused by how quickly I read this after A Natural History, or perhaps pressing distractions of a personal nature. But mainly, I felt a lack of dragons!

Allow me to summarise what we do get in the novel before lamenting what we lack.

We pick up Isabella Camherst three years or so after the first book, in which her husband Jacob died and, at the end of which, we learn she is pregnant. Her son is named Jacob after his father and promptly taken on by nannies whilst Isabella distances herself from him. Even more so than might be expected in this Regency-esque world. To the extent, in fact, that she flees to the continent of Eriga – a thinly disguised Africa just as Vystrana was a thinly veiled Russia.

The expedition arrives and potters about a bit somewhat aimlessly. It seemed poorly conceived. Maybe Lord Hilford, who funded but did not join it, is getting a little vague in his senescence. Eventually, however, the group are given a task by the oba in whose palace they’ve been whiling away their hours: descend to the rain jungle / swampland of the neighbouring Mouleen area and bring back dragon eggs. More time was whiled away. Only a couple of dragons were seen.

What this was really was a study of the society of the Moulish (with whom we spent most time) and of tensions and conflict between the somewhat mercenary Scirlanders and various other tribes using the Mouleen swamps to further their own ambitions. At least once, Lady Trent informed me that she should not be distracted by her natural history of dragons and meditations on their life cycle when her reader was more interested in the army she’d encountered.

The book meandered a little in the first half and rushed towards the end but it was a perfectly decent read.

We retained Lady Trent’s narration and her voice remained convincing, entertaining and engaging throughout.  As a character, as Isabella Camherst, I felt she benefitted from the extra years and was more credible than the girl in the first book who kept on coming up with the answer. We added Nathalie, Lord Hilford’s wayward engineering granddaughter who, to be honest, didn’t really add much to the mix.

What I missed with this entrance to the series – in addition to the direction of the first – was the tenderness of the marriage between Jacob and Isabella. They were lovely together in A Natural History. And the relationship or friendship with Tom Wilker wasn’t enough to replace it.

I don’t want to sound too down on this book: it’s a decent and well-written thing. It is good. It does perhaps suffer from the typical (stereotypical?) middle-book syndrome so I’m hoping that the third book lifts the trilogy.  What am I hoping for from Voyage Of The Basilisk? I hope Jacob (junior) will be brought into the book properly – if the chronology holds he’s probably about four or five at the end of Tropic of Serpents and there may be a delay of years before Basilisk so he could go on the expedition. It seems mean to sideline him utterly! I hope we meet Lord Trent – assuming that Isabella becomes Lady Trent through marriage which is, I suppose, not guaranteed – and I hope that their relationship is given time to develop … Actually no, ignore that. I hope we meet him and some form of relationship develops, but that the romantic relationship doesn’t even begin. 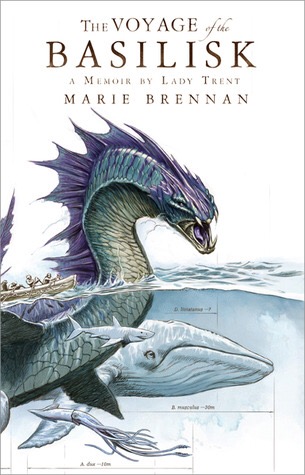 A fantasy and science fiction blog

Quite the Novel Idea

Words from the Clouds

Traveling through books one page at a time.

Film and Literature reviews for all things Sci-Fi, Fantasy, and Horror

The Ladies Who Read

Fueled By Stories and Caffeine

Cosying up with a cuppa and a good book

A Blog for reviewing books and ranting about feelings.

A UK book review website that reviews romance and all it's sub-genres. Not safe for work.

Submit your film, screenplay, novel, to the festival and get it showcased at the FEEDBACK Festival. Full Feedback on all entries.